Students of economics become familiar with several letters of the English alphabet. If you do not know what Y, C, I, X and M mean, then you do not know the subject’s ABC. While the spokespersons for the government of India’s ministry of finance insist that the post-lockdown recovery of the Indian economy, now under way, has taken a V-shape—implying a sharp recovery in the growth rate of output after a sharp downturn—the consensus view of most professional economists is that the economy’s recovery looks more like the letter K.

The letter K captures two distinct phenomena—a V on top of an inverse-V. The corporate sector and big business have seen capacity utilisation recover sharply, output rise and, importantly, a bounce back of profitability. Air travel across cities has resumed and flights are all full. Those who have the money are back to spending it and the stuff they spend on is helping the corporate sector experience of a revival of demand. While alphabetically K comes before V, economic policy, too, should focus first on K and convert K-shaped growth into a V-shaped one. 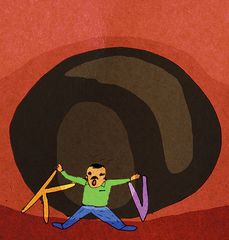 The return of corporate sector profitability has not been accompanied by a restoration of all the jobs lost during the lockdown, especially contract and casual labour employment. Moreover, the V-shaped recovery in the organised sector is not seen in the micro, small and medium enterprises (MSMEs). Both Finance Minister Nirmala Sitharaman and Prime Minister Narendra Modi have admitted as such. The Union budget and the May 2020 package of the government recognised this problem and have tried to address it. Critics would say “not enough”, while the government would say it has done the best it can, given fiscal constraints.

While there would be differences between spokespersons of the government and its critics on the effectiveness of the measures taken to address the problem of the MSMEs and the larger problem of unemployment, the fact is that there is universal recognition that these remain policy challenges for the government.

The loss of existing jobs is one challenge. Equally worrying is the decline in new recruitments. Think of a middle class family in which the father and/or mother have lost jobs and the young daughter and son entering the job market find no new openings. This segment of society lives below the V, in the world of the inverse-V. This phenomenon is not specific to India, but is witnessed in many market-economies around the world where security of employment is not guaranteed and no social security nets are provided.

What is surprising, however, is that despite the differential impact of the lockdown and the post-lockdown recovery on different sections of society, class-based political mobilisation is still very limited. The ruling Bharatiya Janata Party has sought to pre-empt such mobilisation by keeping up the nationalist rhetoric, so that people’s anger due to a worsening of their economic situation is channelled into nationalist and communal campaigns rather than class-based mobilisation. How long the economic growth process remains K-shaped will depend on the distributional impact of the government’s pro-growth economic policies.