In a recent episode of Kaun Banega Crorepati, Amitabh Bachchan asked a contestant which finance minister had read out the shortest budget speech in Parliament. All of 800 words. The options given were: Rajiv Gandhi, H.N. Bahuguna, H.M. Patel and Nirmala Sitharaman. The 18-year-old contestant sought a lifeline. She has clearly not lived long enough to know that of the four named, only one was a non-politician, and so most likely to have delivered the shortest speech! H.M. Patel, the retired ICS officer who was prime minister Morarji Desai’s finance minister, is the right answer.

The length of the finance minister’s speech has nothing to do with the task at hand, of seeking Parliament’s approval for the government’s revenue and expenditure proposals. Admittedly, Patel was merely seeking a vote on account in 1977 and not presenting a full-fledged budget and so restricted himself to an 800-word statement. However, there have been many other such vote-on-account statements from politician finance ministers and each of them was a long speech. With time, our 18-year-old will come to realise that no politician likes to give up the opportunity of holding Parliament’s and the country’s (with live TV coverage) attention. 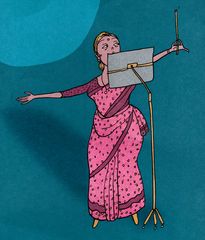 Nirmala Sitharaman broke the record last year with a speech that left her speechless. Mercifully, this year she spared us and herself the agony with a 110-minute speech—the shortest in recent times. Since the finance minister hogs the national attention through budget day and evening, the prime minister too manages to secure his airtime to remind everyone that he is the boss. As prime minister P.V. Narasimha Rao once famously said, “The finance minister is like the number zero. Its value depends on what number you place before it. The PM is that number.”

Last year’s poorly crafted budget and badly drafted speech got both the PM and the FM a zero. This year, both have secured distinction. Sitharaman did what she was expected to by most analysts. To quote her, she has tried to “spend, spend, spend” her way out of the downturn. A brief policy statement forces a politician to focus. Sitharaman kept her focus on top-of-the-mind issues of reviving growth, encouraging investment, promoting savings and stimulating demand. If public spending can trigger private spending and demand perks up generally, there is the hope of real recovery. If the demand stimulus is not met by a supply response, inflationary pressures will mount. This is one downside risk that the government has to be alert to.

The global intellectual climate of economists’ opinion has come to Sitharaman’s rescue. The discrediting of what has come to be called “neo-liberal” economics identified with the so-called ‘Washington Consensus’, over the past decade, has allowed Sitharaman to get away with a fiscal deficit of 9.5 per cent of national income (gross domestic product). She has buried, for all practical purposes, the Fiscal Responsibility and Budget Management Act and got away with it. While sovereign rating agencies may baulk at this, the finance ministry’s Economic Survey has shown them their place. Since the New York-based rating agencies march to Washington, DC’s tune, the foreign minister would be expected to dial DC and make sure the agencies do not step out of line.

In spending more on welfare and infrastructure, Sitharaman has had to curtail the defence budget. Here, too, the foreign minister will have to step in to make sure diplomacy does the job for defence. Sitharaman should be happy with the overall response to her third budget statement. This should help ensure that she gets to present the fourth one too!