It was in May 1943 that Netaji Subhas Chandra Bose gave his clarion call: “Comrades! Soldiers! Let your battle-cry be—‘To Delhi! To Delhi!’ Our task will not end until our surviving heroes hold the victory parade.... on Lal Qila, the Red Fort of ancient Delhi.” Eight decades later, the seat of power in Delhi continues to elude Bengal’s leaders. If Gujarat has nursed the grouse that Mahatma Gandhi chose Jawaharlal Nehru over Sardar Vallabhbhai Patel, Bengal too has had the grievance that Gandhiji was half-hearted in his support for Bose. Netaji managed to convincingly defeat Pattabhi Sitaramayya in the party elections of 1939, but it was a pyrrhic victory. Unable to win over Gandhiji, Bose was left with little option but to resign and eventually walk his own path.

Bose and Patel had a reasonable chance of becoming free India’s first prime minister. Gandhiji’s decision to adopt Nehru queered the pitch. While Patel dutifully accepted Gandhiji’s decision, Bose revolted. A Gujarati managed to succeed Nehru’s daughter, when Morarji Desai became PM, and another one succeeded in ousting the Nehru-Gandhi dynasty. Bengal, on the other hand, has continued to miss the opportunity of hoisting Netaji’s flag on Lal Qila.

The ‘historic blunder’ of the politburo of the Communist Party of India (Marxist) robbed Jyoti Basu of the chances of becoming the first Bengali PM. Rajiv Gandhi’s acolytes and the coterie around Sonia Gandhi managed to stymie the chances of yet another Bengali, Pranab Mukherjee. Interestingly, both Basu and Mukherjee nursed a grievance on this score till the very end.

The north has had its PMs (Nehru, Shastri, Indira, Rajiv, V.P. Singh, Charan Singh, Chandra Shekhar, I.K. Gujral, Vajpayee and Manmohan Singh) and so have the south (Narasimha Rao and Deve Gowda) and the west (Morarji and Narendra Modi). The east never managed to get its own on Delhi’s throne. 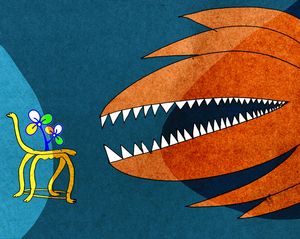 The coming assembly elections in West Bengal could once again offer Bengal the opportunity to throw up a national leader if Mamata Banerjee secures a third term. The verdict will decide not only who rules from Kolkata, but also who can potentially rule from Delhi if a credible coalition can be formed under Banerjee’s leadership. Little wonder then that the Bharatiya Janata Party is determined to ensure her defeat.

Bengal has every right to feel aggrieved. After all, it was not only the first capital of British India but also India’s intellectual capital. It was not for nothing that Gopalakrishna Gokhale said ‘what Bengal thinks today, India thinks tomorrow’. Political analysts have often suggested that if in 1996 the CPI(M) politburo had allowed Basu to head the United Front government it may have lasted its term. After all, the wily and well-heeled communist had established a record of sorts remaining chief minister for twenty-three long years.

More recently, it has been reported, Mukherjee has claimed in his yet-to-be published fourth volume of his autobiography that if he had been PM the Congress would not have suffered the ignominious defeat it did in 2014. Both Basu and Mukherjee were consummate politicians and had the ability to take friends and detractors along. Banerjee, on the other hand, has not yet demonstrated the capacity to be inclusive in her leadership. But then, neither has Modi. Perhaps the country wants tough-minded leaders.

The 2021 electoral contest in West Bengal would then be between a tough-minded Banerjee and an equally tough-minded Modi. It remains to be seen whether Banerjee will be able to summon the ghosts of Netaji, Basu and Mukherjee in her support and once again give a spirited call to fellow Bengalis, “Delhi Chalo!”