I lived my childhood in a locality of Hyderabad called Hardikar Bagh. My high school was situated near Kundan Bagh and my college in Bashir Bagh. Many localities in Hyderabad had the suffix ‘bagh’(garden) because that is how the founders of Baghnagar wanted the city to be. While Bengaluru has come to be known as India’s ‘garden city’, Baghnagar, now Hyderabad, was the original garden city. The sultans of the Qutb Shahi dynasty developed a city of gardens on the banks of the River Musi, across the plains from their rocky fort of Golkonda.

The love affair of the Qutb Shahi sultan, Muhammed Quli Qutb Shah, with a Hindu dancer and singer, Bhagmati, has created some confusion about the city’s original name. Some historians insist the city was called Bhagnagar, after Bhagmati, and became Hyderabad when she converted to Islam and became Begum Hyder Mahal. This version fits well into the “love jihad” narrative of the Bharatiya Janata Party, though the BJP has now demanded that the city be named Bhagyanagar. Bhagya meaning fortune or destiny. 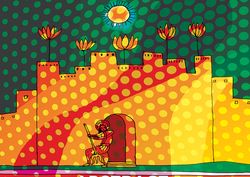 Through the 15th to the 17th century, this urban settlement was referred to as Baghnagar and Bhagnagar in English texts and maps. Historian Andrew Petersen records in his History of Islamic Architecture that Hyderabad was originally called Baghnagar—a city of gardens. Narendra Luther, a civil servant-turned-historian, quotes the Italian traveller Abbe Carre recording in 1672: “This large town... Bhagnagar is full of strangers and merchants. Foreigners and others carry on the trade without restrictions to their nationality.” Mahomed Kasim Ferishta in his History of the Rise of the Mohammedan Power in India (1829) and H.C. Briggs in The Nizam, His History and Relations with the British Government (1861) have recorded that at some point in the 18th century, Baghnagar/Bhagnagar was renamed Hyderabad.

It was the Congress Party that first gave currency to the name ‘Bhagyanagar’, creating the Bhagyanagar Urban Development Authority in the 1970s. Even if the romantic origin of ‘Bhagnagar’ is true, it was still not ‘Bhagyanagar’—the city of fortune/destiny—though that is what Hyderabad has become over the past two decades. Does it then all come down to the location of the letter H and the word’s pronunciation?

I place greater trust in ‘bagh’ than in ‘bhag’ simply because so many localities of the city are called ‘bagh’ and the city of my youth was indeed a ‘garden city’ before concrete took over. While the story of the city’s naming as Bhagnagar is one of love and romance, the name Baghnagar is an equally romantic story of grace and aesthetics, and the ruler’s love for the beauty of nature, if not a woman. However, by contrast, both the political demand for its renaming and the name suggested, Bhagyanagar, are loaded with notions to do with power and wealth.

That is a pity. Hyderabad for me will always be associated with romance, love, gardens, beautiful architecture, grace, hospitality and the confluence of many cultures. As the capital of a kingdom that covered a wide swath of the Deccan, Hyderabad was always truly cosmopolitan. Home to Telugus, Maharashtrians, Kannadigas, Tamils and the Kayasthas who came from the north to join the nizam’s government.

While the Telangana Rashtra Samithi came to power demanding the ouster of “settlers” and “outsiders” from the metropolis, it soon realised that Hyderabad’s cosmopolitanism was its strength, its destiny and its true fortune. The city’s growth is a tribute to the creativity of the people who have come to make it—Telugus and non-Telugus, Hindus, Muslims, Christians, Sikhs and Parsis.