Their lotus is blue 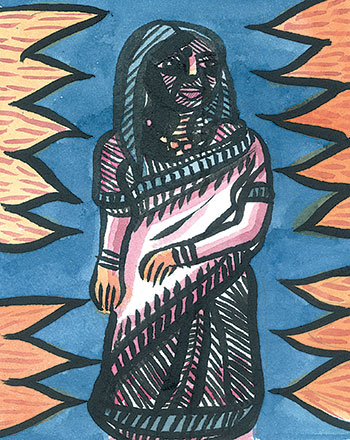 President George W. Bush first ran into prime minister Manmohan Singh on the ramparts of the Kremlin two months before Singh’s July 2005 state visit to Washington, DC. They were in Moscow to witness the Victory Day Parade celebrating the golden jubilee of the Soviet Union’s defeat of Nazi Germany. Pulling his wife Laura close, Bush reportedly introduced her to Singh saying, “This is the prime minister of India. He is Sikh. His country’s president is Muslim and his party president is Christian.” “Most Indians are Hindus,” Bush reminded his wife, adding “India is a great democracy.”

The pluralism and liberalism that defined Indian society and democracy have long been its great strengths. That is why many in India and around the world have been worried about the growing assertion of Hindu majoritarianism. Indians celebrating the historic election of a person of Indian-African-American parentage, Kamala Devi Harris, as the first woman vice president of the United States, should sit back and ponder why there are so few representatives of minority communities in the Union council of ministers today. The parliamentary contingent of the ruling Bharatiya Janata Party, whose party symbol is the name of the US vice president-elect, does not have a single Muslim or Sikh in the Lok Sabha. The representatives of these two communities in the Union cabinet come from the Rajya Sabha.

The very moving victory speeches of both Joe Biden and Harris emphasised repeatedly that the most important message of the US election verdict is that a majority of American citizens had rejected the white majoritarianism of Donald Trump and his extremist faction of the Republican Party. Trump did not do poorly in the elections and has in fact increased his support base, fighting hard to win on a narrow platform of white supremacy. But a rainbow coalition of Americans united to ensure that the US remains true to its own constitutional values. It is not as if white Americans have lost power. Biden is a true blue white, so to speak. The US power elite is predominantly white. Yet, even a symbolic sharing of power with non-whites does enable the integration of a diverse nation.

In India, too, the power elite have always been Hindu, from upper and middle castes, and will remain so for some time. Yet, the “umbrella” nature of the Indian National Congress facilitated national integration. Learning from the Congress experience, as well as that of the coalitions that followed, prime minister Atal Bihari Vajpayee ran an inclusive government. He named a Christian as his defence minister and made a Muslim the nation’s head of state. In a plural democracy, such gestures cannot be dismissed as appeasement or tokenism. Vajpayee’s inclusiveness strengthened India, even though he believed in his party’s ideology of hindutva.

The Hindu extremism of the present leadership has weakened, not strengthened, India. Much like Trump’s majoritarianism. The recent revival of a detestable and abhorrent concept of “Love Jihad”, with elected political leaders seeking to criminalise inter-community marriages, does no credit to India’s constitutional values of pluralism and individual human rights, not to speak of values such as humanism and secularism.

The watchword of “unity in diversity” is no empty slogan. It is an idea that goes to the core of our national identity. It is the foundational principle of our Constitution. Indeed, it is captured by the ancient wisdom of Vasudhaiva Kutumbakam —the whole world is one family. The wisdom, greatness and the universal and continued appeal of Hinduism lie in its pluralism and liberalism. The sooner the present BJP leadership understands this, the better for India.