The media love lists, and Indian media obsess about western lists. How is India doing on this index and that, by how many places has it moved up or down. Rarely does such reporting educate the reader or viewer about what goes into the making of a list—the criteria used, the data digested, the assumptions made and the biases inherent to definitions. So, it was not surprising that when the newsmagazine Time included Prime Minister Narendra Modi in a global list of “100 Most Influential People”, Indian media was quick to report but without spelling out why he had made it.

Remember that the criterion for making it to even Time’s “Person of the Year” is the person should have “most affected the news and our lives, for good or ill”. It was left to one of Modi’s irrepressible critics to point out that Time picked the prime minister for this list more for “doing ill than good”, so to speak.

Time explained its choice stating: “First elected on a populist promise of empowerment, his Hindu-­nationalist Bharatiya Janata Party rejected not only elitism but also pluralism, specifically targeting India’s Muslims. The crucible of the pandemic became a pretence for stifling dissent. And the world’s most vibrant democracy fell deeper into shadow.”

Despite the fact that the west is today largely on India’s side, and Prime Minister Modi has established good relations and rapport with most major western leaders, western media is turning increasingly critical of him. However, nothing that has appeared in western media is more critical of Modi than what appears in Indian print media. It is only Indian television that has become excessively adulatory. 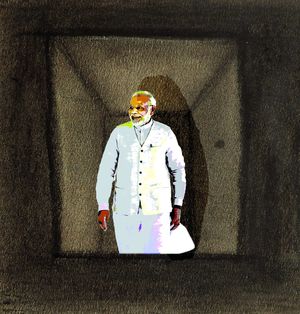 Modi is not the first Indian prime minister to be criticised by western media. From Jawaharlal Nehru to Manmohan Singh, every Indian prime minister has been conferred both bouquets and brickbats. In 2008, Newsweek, under Fareed Zakaria’s editorship, wrote off Singh and echoed the view of Rahul Gandhi cronies who, in the run up to 2009 election, wanted an “ageing” Singh to make way for “young” Rahul. Singh surprised everyone later that year leading his coalition back to power with more MPs in tow.

In 2002, Time declared that prime minister Atal Bihari Vajpayee was “asleep at the wheel” and that many in his party wanted him replaced. Nothing of the sort happened. Despite getting Indian politics wrong on many occasions and underestimating the survival instincts of Indian prime ministers, western media manage to make a splash in India, often with half-baked stories. This is more a reflection of Indian obsession with what the west thinks of us than a comment on western media’s political prescience or ability to tell the truth.

It is one of the ironies of Indian media that it invests so little in covering the world and reporting from foreign stations but pays so much attention to what world media says about India and its leaders. Among all the major powers, India has the fewest number of foreign correspondents. World news comes to Indian media from foreign sources, rarely their own correspondents. Worse still, Indian media’s sourcing of news of non-western societies and many of India’s neighbours also comes from western media sources. It is an odd love-hate relationship: excessive dependence on western media for news, combined with condescension when the news is not complimentary.

It has been reported that Foreign Minister S. Jaishankar has instructed Indian diplomats overseas to build better relations with local media. While this is necessary and diplomats can help improve India’s image overseas, there are limits to how much carefully built images can blur a reality staring in one’s face.