Look at where the economies of China and India were in the 1980s, and look where they are now. The power differential between the two today is largely a consequence of the different trajectories of economic performance. That was the reminder that External Affairs Minister S. Jaishankar offered last week in a televised discussion, echoing Bill Clinton’s famous slogan: It’s the economy, stupid!

It reminded me of what one of his distinguished predecessors as foreign secretary, K. Raghunath, told members of India’s National Security Advisory Board (NSAB) in 1999. Asked what needs to be done to make Indian foreign policy more effective, Raghunath’s reply was quick—improve India’s economic performance. A stronger, more efficient and more competitive economy would facilitate more effective diplomacy. The era when good speeches and clever posturing made up for poor economic performance was over. 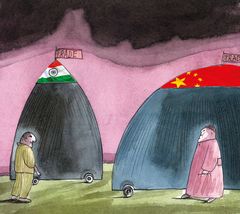 The NSAB report that was then prepared reflected the strategic thinking at the turn of the century. China had gained power and influence with its economic capability and performance. Higher economic growth helped improve state capacity, including the fiscal capacity of the state. This, following Kautilya’s famous axiom in the Arthashastra—“from the strength of the treasury, the army flows”—enabled China to become a military power.

If China is today more influential globally it is not because the world has discovered its civilisational greatness or exciting cuisine, but because it has demonstrated economic and human capability and has built relationships of interdependence with nations big and small.

In the first two decades of the 21st century, China became an economic superpower and so became a great power. India has yet to become an economic superpower. From Raghunath to Jaishankar and after, Indian diplomacy can do its best to manage a difficult world, but at the end of the day India’s global standing and power will be shaped in farms and factories, in classrooms and laboratories. When India is economically not only stronger and self-reliant (atmanirbhar) but also more efficient and competitive (globally engaged), it will also be regarded a great power. Till then, we need clever diplomats and generals to mind the gap, and cleverer political leadership to bridge the gap.

I am not yet convinced by the argument that external trade is a threat rather than an opportunity for the Indian economy. Jaishankar is wrong to buy into the Swadeshi Jagran Manch argument that Indian industrial development has been hurt by external trade, especially the few free-trade agreements negotiated by the Manmohan Singh government. India’s decision to walk out of negotiations towards a Regional Comprehensive Economic Partnership (RCEP) agreement was a consequence of such thinking.

While Indian business leaders who run globally non-competitive firms may agree with what the external affairs minister was saying, those who have benefited from globalisation will not. Indeed, this year the trade surplus being generated signals a slowdown in domestic economic activity, not the growing competitiveness of the economy. There are many reasons why the share of manufacturing in India’s national income is stuck at around 16 per cent for two decades. External trade is certainly not the most important one.

Moreover, there is a contradiction between the government seeking more foreign direct investment while turning away from external trade opportunities. Surely, atmanirbharata does not mean getting foreigners to produce more in India for the Indian market alone. Foreign direct investment policy is about tapping the world market. Trade is the means to that end.