The United States administration of President Donald Trump has given India a historic push. It has elevated India to the rank of a developed economy. Hallelujah! Perhaps President Trump deserves a Bharat Ratna for helping India rise so fast in such a short period of time. No other politician has been able to stage this developmental miracle for India. If you still think India is a developing economy with per capita annual national income of just $2,000 compared with $60,000 for the US, then you must be living on a different planet, certainly not on Trump’s La La Land.

One cannot blame the simplistic mind of the Trump administration for having come to such a historic determination. After all, what about India do most of them see around them all the time? Some of America’s best educated, talented and best behaved people earning twice as much as an average white American. Consider the statistics. According to the well-known US public information surveying agency, Pew Research, the median household income of Indian immigrants in the US in 2015, at $1,01,591, was almost double that of not just all other immigrant nationalities ($51,000) but also almost double that of the average native American households ($56,000). If Indians around you in the US are so much better off than the average Joe, surely India must be a developed country! 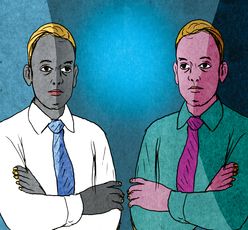 Now look at the other side of the coin. There are over four million Indian Americans in the US and almost all of them, with very few exceptions, either themselves or their parents, migrated after 1980. Less than 10 per cent of the 4.4 million migrated before 1980. A significant number of the migrants were initially educated in India, mostly in government subsidised public institutions. Their initial educational base was good enough for them to excel in institutions of higher learning in the US and get all those well-paying jobs. Today many of them contribute to the development of American science and technology, business and finance, academia and public institutions.

It would be worth quantifying the total economic contribution of Indian Americans to the United States, especially its growth after the end of the Cold War. The ‘brain drain’ to the US out of contemporary India may well be worth more than the ‘drain of wealth’ from colonial India to Imperial Britain. One could argue that by exporting talent, a developing country has aided the continued global dominance of a developed one. The sum could well run into trillions of dollars and that should be considered India’s aid to the US.

US trade negotiators complain that India remains closed to US imports and is running a trade surplus. India’s negotiators could tell their counterparts that the talent this country has exported to the US more than makes up for this. In fact, a developing India is contributing by the hour to keep developed America developed. President Trump may complain that many Indian Americans are not voting for him. That, too, is an important contribution of Indian Americans to America’s development.