From proprietorship to party

In his fictionalised autobiography, The Insider, former Prime Minister P.V. Narasimha Rao has a provincial leader of the Indian National Congress describing Indira Gandhi’s takeover of the Congress as the party becoming a proprietorship. The Congress, to be sure, was never really a ‘party’. It was what its name suggests, a ‘congress’. The dictionary defines the word congress to mean a gathering, a platform, a meeting of minds. That was what the Indian National Congress was before 1947 and that is how Gandhiji wanted it left to remain. Several parties grew out of the Congress, while the Congress itself evolved into a ‘system’ of political mobilisation, organisation and governance, as political scientist Rajni Kothari famously put it.

Till 1969, the Congress tried hard to function like a party. Once Indira Gandhi staged her coup and then, in 1975, her younger son stepped in to take charge, the party had indeed become a proprietorship. It then began to call itself Congress (I) for Congress (Indira). By the same token, in 1998, we saw the creation of a Congress (S). In between, in 1992, Narasimha Rao tried to reinvent the pre-Indira Congress by conducting organisational elections in the run-up to the All India Congress Committee gathering at Tirupati. He legitimised his ‘nominated’ status as party president by getting himself properly elected. Next year, a dissident group rebelling against Rao’s leadership called itself Congress (Tiwari). For all these reasons, I have always believed the correct name for the party that made Sonia Gandhi its president in 1998 should be Congress (Sonia). 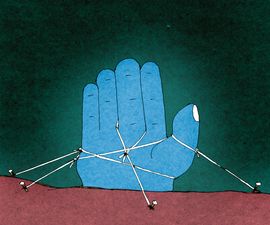 It is precisely because the party has been a proprietorship that the change of guard after an ignominious defeat is proving so difficult. In any normal political party, the incumbent leader would quit when defeated and a new round of organisational elections would have been held to elect a new leader. Not so in a proprietorship. The owner has to nominate the successor. As an aside, the proprietorship metaphor was made more apposite by the fact that many properties of the Sonia Congress became trust properties, including the Jawahar Bhavan on New Delhi’s Rajendra Prasad Marg that was originally constructed to house the Congress headquarters and became home to the Rajiv Gandhi Trust and Foundation, with all such trusts governed by the family and its loyalists.

How then does one reconvert a proprietorship into a party? That is the dilemma facing the Sonia Congress. Should the Congress’s next president be nominated by the present proprietors or should a popularly elected leader take charge? In politics, power is never inherited. It is acquired. Both Indira Gandhi and Narendra Modi acquired power through their political actions. While both may have been initially nominated to their national leadership roles, Indira by K. Kamaraj and Modi by Rajnath Singh, the fact is that both Indira and Modi acquired power by asserting their leadership over all others. Whoever succeeds Rahul Gandhi as Congress president will have to do likewise.

In politics, opportunities to assert leadership do not arise often and certainly do not come twice. A good opportunity was lost when Adhir Ranjan Chowdhury was nominated leader of the Congress in the Lok Sabha. If at that time someone like Shashi Tharoor had demanded an election to that post, he would have launched a new phase in the evolution of the party. Even if Tharoor did not offer himself as a candidate for leadership of his party in Lok Sabha, he could easily have stood up and demanded an election for the post. What is the use of preaching democratic values to the nation and the world when one’s own party does not value them?