India’s time is yet to come

Last week, the Pondicherry Literary Festival devoted a session to the question “Can India become an economic powerhouse?” My thoughts went back 27 years and recalled the famous last sentence from finance minister Manmohan Singh’s famous budget speech of July 1991. “The emergence of India as an economic powerhouse is an idea whose time has come,” he told Parliament. The organisers of the Pondy Lit Fest must be complimented for implicitly admitting that the idea is still one whose time is yet to come.

The optimism of the 1990s, which began with India overcoming an economic crisis and ended with the country overcoming the economic consequences of the May 1998 nuclear weapon tests, lasted into the 21st century, as the world no longer viewed India as just another ‘emerging economy’ but also as a ‘rising power’. We owe it to the political leadership of prime ministers P.V. Narasimha Rao and Atal Bihari Vajpayee. More importantly, they altered India’s aspirations. In the first decade of the new century, the Indian economy performed better than it did in the previous quarter of a century. This fuelled India’s aspirations and shaped the narrative about India. 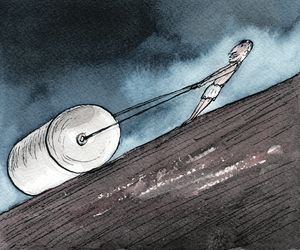 As we moved in to the second decade, several things happened that increased the distance between India’s aspirations, what the world expected of India and its capabilities. The trans-Atlantic financial crisis, domestic policy confusions and mistakes, and a sense of political drift after 2011 robbed the powerhouse of its energy. Over the past four years the economy has slowly recovered, but is still functioning below potential. As a consequence, India’s ability to project power has weakened. At the same time, the emergence of China as a major economic and geopolitical power has cast a shadow over India.

While economists have readjusted their sites because their thinking and analysis are, perforce, based on numbers, foreign policy and international relations experts continue to think of India as not just a ‘rising’ power but also a ‘leading’ power.

Let’s face it. India is still an emerging economy and a rising power, but it is premature to regard it as anything more. It is useful to remember that ours is still a lower middle income country. The first call on resources will always be that of basic developmental needs—education, health, rural development and employment generation. In the past decade, we have not been able to increase the pace of industrial development. Both industry and agriculture pose enormous challenges. The country’s political leadership will remain preoccupied with these developmental challenges for some time to come.

It should surprise no one that India’s influence in its own neighbourhood, not to mention Asia as a whole, has come down and that of China has gone up. Money matters. Economic capacity is the foundation on which geopolitical influence is built. India’s time will come. It will be a major power. But, right now the task is at home.

There is a lesson to learn from the way in which Rao and Vajpayee managed the nuclear issue. Both recognised that unless the economy is on even keel, nuclear tests could destabilise development. Vajpayee’s decision to declare a moratorium on tests and adopt a “no first use’ policy was criticised by the hard power hawks. The Vajpayee doctrine proved to be wiser. Once the tests were done, his focus shifted to the economy. The growth his policies triggered contributed to the Rising Power narrative over the next decade. To regain and sustain that narrative, economic development has to remain India’s priority for a long time to come.