In the end, it was an Australian who did it for Chennai. Don’t think it is the gripe of a Hyderabadi. After all, we placed all our hopes on an Afghan! I am not much of a cricket buff, but as a loyal and sentimental Hyderabadi I could not but remain glued to the television watching a Kabuliwala take Hyderabad to the top of the Indian Premier League (IPL) in the semifinals and invested all my hope in him. Rashid Khan has become the new poster boy of cricket. But, who bothers about one’s flag when the game is about brands.

In the semifinals Chennai’s flag was held up by a white South African, and on Sunday the Australian stepped in. The captain of Chennai Super Kings (CSK) is, of course, a very Indian hero. But, it was reported, Mahendra Singh Dhoni was delighted that the South African and the Australian helped him thumb nose at the New Zealander Kane Williamson who captains the Hyderabad team. So, what flag does loyalty wear to a cricket match these days?

The thought occurred to me while listening to a cricket quiz on an FM station while driving down Rajpath. What is the name of the movie where the story revolves around cricket, the radio jockey asked. The film on Dhoni, came the instant reply from one of the chaps who had phoned in. The radio jockey sounded nonplussed. Yes, he said, weakly, there is such a film, but can you name another? “Sachin; A Billion Dreams,” came his instant reply. The quizmaster was not prepared. “Arrey bhai, I am asking about a film on cricket, not about cricketers!” It took a while for someone to say Lagaan. 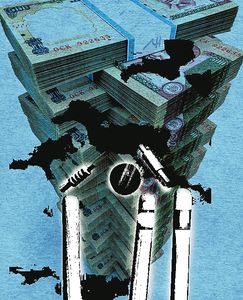 Lagaan was about the game and the team. Not about individual players. It was infused with the team spirit of a nation in the making. Ordinary Indians defeating their colonial masters at their own game. Years ago, the distinguished Marxist economist and writer, Ashok Mitra, wrote about how every sixer that the West Indian Gary Sobers hit was a message to the English Queen, or some such thing. Cricket was a game of the rulers in the Empire. When the clerks and coolies began playing their erstwhile masters, every sixer was a political statement.

Then came the next phase. When India played Pakistan or Sri Lanka played Australia, national loyalties were still at play on the pitch and around the stadium. IPL changed all that. With the singular exception of the India-Pakistan rivalry, with jingoism taking grip of the game if it is ever played, none of the other countries evoke any of that old nationalistic sentiment any more. Most sport is living through this confusion in the viewer’s mind—caused by money, markets and media. Is one playing for a country, province, county, city, school, college or is one playing for oneself, for a brand, for a corporate or just for the money?

If India were to resume playing Pakistan, nationalism would still grip the audience, but when a New Zealander-led Sunrisers Hyderabad play a Dhoni-led Chennai Super Kings, the game enters a post-nationalist arena in which locality loyalties overtake nationalist sentiment. The upside to this is that the game comes into its own. An audience does not only cheer its own side but more often than not ends up cheering a good player. Khan, the Afghan, was heartily cheered in Kolkata, Mumbai and Hyderabad. It was his good game that the crowd was cheering, not his flag and nation.

Many sports have entered the ‘post-nationalist’ era with the globalisation of the three Ms—money, market and media. Time was when football lovers in Kolkata loved Pele, the Brazilian, because he was good, but also black and Third World. The Mitra idea that an element of anti-colonialism did drive the game. Today, chances are a Kolkata audience would cheer a Pele as much as they would a Zinedine Zidane. The globalisation of sport has, curiously, created global heroes and cultivated an individual fan following. The flag is just a wraparound.

Sanjaya Baru is an economist and a writer. He was adviser to prime minister Manmohan Singh.