Will autorickshaw drivers in Gujarat accept or reject Kejriwal?

Arvind Kejriwal’s standard practice of visiting the house of an autorickshaw driver in poll-bound states had a twist in Gujarat. The state police, which was providing security for the Delhi chief minister, objected. Kejriwal’s well-scripted plan went awry as the police could not provide security at short notice around the poor wage-earner’s house. But, Kejriwal, who is on frequent forays to the state pitching for the Aam Aadmi Party would not budge. Finally, Kejriwal, accompanied by hefty policemen, travelled to the autorickshaw driver’s home in his three-wheeler. The AAP said the BJP, which rules Gujarat, was scared of Kejriwal’s popularity among the poor. The state countered it was acting out of security reasons.

But it is the targeting of autorickshaw drivers—who are in large numbers in every big city and also found in tiny towns—which shows the importance of this vote bank. The AAP had won over the autorickshaw and cycle rickshaw drivers as well as pavement vendors to capture Delhi in successive elections. The drivers and their families form a chunk of dependable voters, especially as the AAP promises to protect them from police harassment. 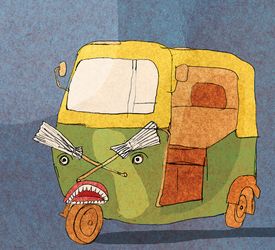 Going for a meal with a poor family has also been a familiar electoral tactic for the BJP, as its heavyweights like Amit Shah and J.P. Nadda descend on selected dalit and tribal families, with cameramen in attendance. In Karnataka, Chief Minister Basavaraj Bommai and his ministers stay the night at a villager’s home to show they are closer to the grassroots. The Janata Dal (Secular), however, insists it was H.D. Kumaraswamy who popularised the practice of village stay during his first tenure as chief minister.

Prime Minister Narendra Modi has focused on women voters by targeting his programmes of food and fuel subsidy to women in urban chawls and villages. Statistics show that in the last elections Modi got a higher percentage of votes from women.

The identification with rickshaw drivers, who provide affordable transport to the common man, began with Tamil Nadu actor-turned politician M.G. Ramachandran. He made a successful film Rickshawkaran, where he played a poor but self-assured cycle rickshaw driver who overcomes troubles to emerge victorious. When MGR went campaigning, the highlight would be the procession of thousands of cycle rickshaws. It earned an entire vote bank for MGR. Later, several actors in other languages drove autorickshaws to win them over as cities expanded.

Maharashtra Chief Minister Eknath Shinde proudly recalls his early days as an autorickshaw driver in Thane, and how he got involved in politics by mobilising drivers for the Shiv Sena. Though he is criticised as the state’s wealthiest ex-autorickshaw driver, Shinde attributes his electoral success and the clout he wields in urban areas near Mumbai to his base among autorickshaw drivers and other low income groups.

Kejriwal, today, finds autorickshaw drivers useful for propaganda. Impressed with his penchant for families of autorickshaw drivers, many agree to display the AAP’s posters or slogans on their vehicles. As they crisscross thickly populated areas, the posters attract wide attention.

In Gujarat, the resistance to policemen, too, is being added to the legends around the Delhi chief minister, who, in his activist days, had climbed electricity poles amid protests against disconnected power supply. Now, it is for the autorickshaw drivers in Gujarat to endorse or reject him.