Palanivel Thiaga Rajan has struck a strong blow for rights of state governments on policies and budgets. But the language used by the Tamil Nadu finance minister against the prime minister is perhaps unwarranted, when Narendra Modi did not name the southern state while attacking the freebie culture. Neither Chief Minister M.K. Stalin nor father M. Karunanidhi would have referred to Modi as just the “Varanasi MP”. Thiaga Rajan questioned the economic track record of Modi, who handled finance as Gujarat chief minister. But he has rightly argued that free services and essential goods given to the state’s population is well within its domain, as long as it follows the Constitution and the Fiscal Responsibility and Budget Management Act.

The debate began with Modi being furious with Arvind Kejriwal offering free electricity to consumers in Gujarat if voted to power, as AAP governments have done in Delhi and Punjab. Modi’s attack on freebies has been taken up by BJP leaders in states where the party is in the opposition. But BJP chief ministers have been largely silent. 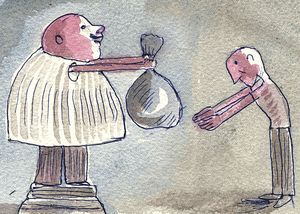 Finance ministers of non-BJP and non-Congress governments have long been assertive on fiscal federalism. When M.G. Ramachandran was attacked for introducing mid-day meal schemes in Tamil Nadu, his finance minister V.R. Neduncheziyan strongly argued that the state was promoting education through the scheme and asserted that the state would find funds. Over time, the scheme became pan-India. Similarly, when another actor-chief minister N.T. Rama Rao offered rice at 02 per kg, there was criticism. Now, Modi government says it gave free ration to over 80 crore people during the pandemic.

Apart from the Tamil Nadu contingent, which included an assertive chief minister J. Jayalalithaa, the vocal set of state finance ministers have been from West Bengal, both from the CPI(M) and the Trinamool Congress. Economist Ashok Mitra articulated the Jyoti Basu government’s demands for fiscal autonomy. His successor for a record 24 years, economist Asim Dasgupta was both a confrontationist and collaborator in Central-state financial relations. Dasgupta headed the empowered group of state finance ministers, which worked with NDA and UPA governments on value-added tax (VAT). He was also involved with the initial work on the Goods and Services Tax (GST). After the Trinamool came to power, another economist Amit Mitra carried the baton.

Unlike the GST, which was rolled out simultaneously in all states, VAT saw delayed implementation in two big states. Under strong chief ministers Jayalalithaa and Mulayam Singh Yadav, Tamil Nadu and Uttar Pradesh did not roll out VAT with other states in 2005.

Another state finance minister who batted hard for fiscal independence of states was Kerala’s Thomas Isaac. The Marxist found his option of raising funds limited under the eye of the Centre, the Reserve Bank and the provisions of the Finance Commission. He devised a government-run agency, entrusted with raising capital through loans for big infrastructure projects, taking them out of the budget ambit. These loans, nicknamed masala bonds, drew the ire of the Centre, which brought them under the state debt limitations. Additionally, Isaac, who opted out of government owing to CPI(M)’s rotation policy, was furious with the Enforcement Directorate for asking whether there was any money laundering for loans borrowed for the state’s infrastructure projects!

Many chief ministers keep the finance portfolio either because they have handled it before or to keep control on their colleagues. One such chief minister was Karnataka’s Ramakrishna Hegde, who organised conclaves of non-Congress chief ministers to demand an end to the Centre’s fiscal domination.