Behind Modi's criticism of dynasts is an electoral factor

BJP needs to undercut regional parties in east and south

Narendra Modi’s Independence Day speech has been viewed through many prisms. His emphasis on India reaching a decisive phase in the fight against corruption is seen as a message to all political rivals—that the central investigative agencies would intensify investigations against those suspected of amassing wealth illegally.

The agencies have already questioned the Congress’s top leadership. There are indications that Trinamool Congress chief Mamata Banerjee may be questioned about the allegations against former West Bengal minister Partha Chatterjee. But there is silence in BJP circles over the inaction of investigating agencies regarding corruption allegations against some BJP leaders, especially in Karnataka, where the contractors have alleged that they had to pay 40 per cent commission to politicians for every project. 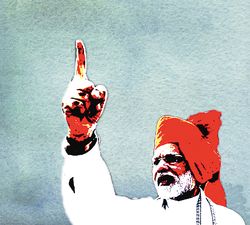 The second prong of the prime minister’s attack was on dynastic politics—a familiar theme in the BJP’s campaign against the Congress and some regional parties. The subject has become all the more relevant after the political coup in Bihar, where the BJP lost power as Chief Minister Nitish Kumar jumped the fence to join the Rashtriya Janata Dal and the Congress, both of which are controlled by dynasts.

Critics were quick to point out that the BJP had chief ministers, Union ministers and office bearers who were dynasts. Congress communications chief Jairam Ramesh described the BJP as a washing machine that laundered the dynastic history of Congress turncoats. Union Ministers Piyush Goyal, Dharmendra Pradhan and Jyotiraditya Scindia come from political families. There are also BJP families where more than one member occupy key positions. Former Karnataka chief minister B.S. Yediyurappa, who is an MLA now, has said that his younger son B.Y. Vijayendra would be his political heir. Vijayendra is vice president of the party’s state unit; another of Yediyurappa’s sons, B.Y. Raghavendra, is a Lok Sabha member.

But Modi’s defence is that he has inherited legacy issues within the party, one of which is the practice of dynasts actively working for the party. His supporters point out that he did not allow family members of prominent leaders like L.K. Advani, Arun Jaitley and Ananth Kumar to replace them in Parliament.

But the pointed focus of his attack is on dynasts who completely control a political party, especially those sons and daughters who control even the second and third positions in a party. The Congress is tightly controlled by Sonia Gandhi and her two children; Lalu Prasad and his wife and children occupy the first to fifth rungs in the RJD; K. Chandrashekar Rao and his son, daughter and nephew control the Telangana Rashtra Samithi; H.D. Deve Gowda and his sons, daughters-in-law and grandsons control the Janata Dal (Secular) from head to toe.

Exceptions are the communist parties, the Janata Dal (United), the Aam Aadmi Party, the AIADMK, and the Biju Janata Dal in Odisha, where Chief Minister Naveen Patnaik, whose father was also chief minister, has no relatives in control of the party. Women leaders such as Mamata Banerjee and Mayawati have nephews in key roles in the Trinamool Congress and the Bahujan Samaj Party, respectively.

Come 2024 elections, and the BJP would have to face dynastic parties, including estranged allies such as the Shiromani Akali Dal run by the Badal family, in about 400 Lok Sabha seats. If the BJP were to lose seats in the Hindi heartland, as well as in Maharashtra and Karnataka, it would need seats in eastern and southern states, where regional parties are dominant.

Modi’s speech from the Red Fort not just framed this national issue, but also acted as a bugle call for BJP leaders and campaigners.