Why war of placards in Parliament may not end soon

When speech is drowned in noise, a placard grabs attention

Don’t bring placards into Parliament complex.” Parliament officials called it a routine circular, but the Congress saw it as a challenge. Young MPs, especially from Kerala and Tamil Nadu, told the leadership that it is the right of MPs to bring placards displaying their demands on burning issues, as they were sure the BJP’s larger shouting power would deny their right to speak.

But the reaction of the Speaker, Om Birla, was equally swift. He warned members not to bring placards, as it violated the discipline of the Lok Sabha. But the Congress MPs insisted on their right, and the government moved a resolution suspending four vocal MPs for rest of the monsoon session. 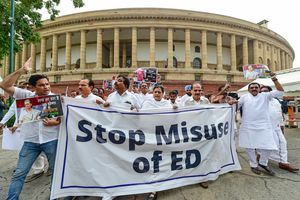 There was similar crackdown in the Rajya Sabha by the Chairman, Venkaiah Naidu, and the government, so more members were suspended. It plunged Parliament into chaos ahead of the 75th anniversary celebrations of India’s independence.

Though the Speaker revoked the suspension a week later, he told the members he would not tolerate if they brought placards. Parliamentary Affairs Minister Pralhad Joshi went a step further, asking for an apology and commitment from the Congress leadership that the members would be disciplined. The Congress would not budge.

Placards matter a lot to the opposition for several reasons. As the BJP has overwhelming majority in the Lok Sabha, it is an uneven match in terms of numbers and lung power. The BJP shouts down any demand to raise issues. The Speaker would not allow zero hour to be a free hour, unlike during the time of minority and coalition governments.

Opposition MPs also realise that live telecast of parliamentary proceedings, as well as YouTube and social media uploads, gives them tremendous exposure. When speech is drowned in noise, a well-written placard grabs camera attention. MPs across party lines are known to get their speeches or actions narrated in subtitles in their own languages.

They argue that the rules were made at a time when telecasting and social media did not exist and only speeches were reported in print media.

But every strong ruling party uses rules to its advantage, while in the opposition it argues the reverse. It is true for the BJP also. Congress members cite how BJP members, when in opposition, brought placards in Parliament and state assemblies.

In almost all parliaments, members bring placards, especially relating to their constituency or special interest demands. The US Congress even allows members to use a stand where large cards, highlighting the case being argued by the member, are displayed by rotation, so that the member can use the telecast selections for his/her constituents. There are also instances, in the South Korean parliament, of both sides bringing contrarian placards and having a placard fight.

The general understanding in Indian Parliament earlier was that while placards were not unwelcome, members should not bring placards attached to steel or wood frames and sticks. These could be used as weapons when tempers run high. It was more welcome to bring slogans written on paper, which if needed can be snatched and torn, like a House of Cards.

No list of banned substances can be complete. Long ago, a member claimed he could bring a revolver to show how lax the security in the complex was. In 2008, BJP members brought bundles of currency and placed them on the table of the Lok Sabha alleging that the Congress was trying to buy some members so that the Manmohan Singh government could win the confidence vote, after Left parties withdrew their support. On television, the cash in the house was more impressive than the speeches.

Members alleging police assaults on them have brought blood-soaked clothes to visually demonstrate their suffering. Members also make statements with the clothes they wear, and sometimes wave scarves of particular colour and signage. Members also use shouting of slogans to make a point in a collective voice. BJP members since 1992 have been saying Jai Shree Ram in Parliament, while communists would often shout Inquilab Zindabad or AIADMK members would raise slogans in Tamil praising their leader J. Jayalalithaa.

The war of placards may not end soon, as the Congress thinks the placards are more provocative, while the BJP is determined not to allow placarding to be a new parliamentary convention.