Sachidananda Murthy on the ‘right’ way to play the diversity card

Congress could learn from BJP how to properly milk diversity agenda

The BJP is claiming the high ground for bringing diversity in national politics through the presidential nomination of Droupadi Murmu. Party leaders are celebrating how Narendra Modi put the focus on the 8 per cent tribal population of the country by selecting the first tribal president. Some followers also say that among the last five presidents, the three nominated by the National Democratic Alliance were a Muslim (A.P.J. Abdul Kalam), a dalit (Ram Nath Kovind) and a tribal (Murmu). The indication is that among the two nominees of the Congress between Kalam and Kovind, only Pratibha Patil fit the diversity nomenclature, being the first woman to be in the Rashtrapati Bhavan, while Pranab Mukherjee was from the upper class.

But Congress supporters argue that if the longer history of the presidency is considered, it is the Congress that chose two Muslims (Zakir Husain and Fakhruddin Ali Ahmed), a Sikh (Giani Zail Singh), a dalit (K.R. Narayanan) and a woman (Patil) as president much before the BJP jumped on the diversity bandwagon. Also, a Sikh (Manmohan Singh) was made prime minister for two terms by the Congress, they say. 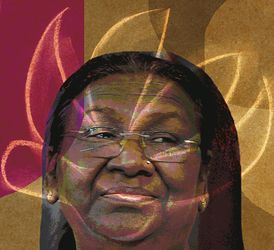 However, there is frustration among dalit and tribal leaders in the Congress, who say the party seems to have deliberate amnesia about its leaders from the backward sections who were given high positions. They argue that the longest-serving tribal chief minister outside the northeast was from the Congress—Vasantrao Naik, who was chief minister of Maharashtra for 11 years (late 1963 to early 1975). He belonged to the Banjara community, a nomadic tribe that is spread across seven states. While the community has OBC (other backward classes) status in Maharashtra, it is a scheduled tribe in Odisha, Andhra Pradesh and Telangana. Naik’s home province—Vidarbha—was part of the Madhya Pradesh state, and was later added to Bombay state that became Maharashtra. He was a legislator and minister in the three states. In 1963, Maharashtra strongman Y.B. Chavan, who had moved to the Centre after the India-China war, had backed Naik for the top post against powerful upper-caste contenders. Naik showed his mettle as an administrator and troubleshooter, and was credited with the success of industrialisation and green revolution in the state. But Naik and his tenure is not remembered much by the Congress high command, as the leftists who dominated Indira Gandhi’s second term argued that he let the Shiv Sena grow to curb communist-dominated trade unions in Mumbai.

Similarly, there is a feeling that the party has not done much to celebrate the long tenure of Jagjivan Ram as cabinet minister and Congress president, despite the dalit leader having the reputation of being one of the best defence and agriculture ministers of India. The BJP accuses the Congress of ignoring its stalwarts because of its Gandhi family obsession.

A crucial difference between the Congress and the BJP is that the ruling party’s leaders, including rejected contenders, publicly accept any decision made by Modi and his core team. There have been exceptions though, like in Tripura, Uttarakhand and Karnataka.

The situation in the Congress is different. Even while declaring that the decision of the Gandhis is final, voices of dissent are loud. This was evident in Punjab last year when the party forced Amarinder Singh out as chief minister and went through a tortuous process to replace him with Charanjit Singh Channi. As a dalit Sikh, Channi was the best example of diversity, but the decision was not even accepted by state party president Navjot Singh Sidhu and his predecessor Sunil Jakhar. That showed Channi could never deliver, and the party plunged to a big defeat.

The Congress may have to learn a lesson or two from the BJP on how to milk the maximum from the diversity agenda.