The inauguration of the 6.5m-tall bronze national emblem atop the new Parliament house by the prime minister was a big event in the project to redefine the mega buildings of the capital area. There have been questions on whether the installation, in which the lions have their mouths open, is a replica of the emblem or a variation.

But, Rajya Sabha members were surprised that only the Lok Sabha Speaker Om Birla was by Narendra Modi’s side, apart from Urban Affairs Minister Hardeep Singh Puri, whose ministry is executing the new complex and other mega government buildings on the Central Vista. Vice President and Rajya Sabha chairman M. Venkaiah Naidu was conspicuous by his absence.

Parliament officials had two explanations. Even when the foundation stone was laid by the prime minister, the vice president was not there, as the construction and maintenance of buildings in the Parliament complex are under the control of the speaker. However, the Rajya Sabha chairman has control over the upper house chamber, lobbies, corridors and rooms allotted for offices and parties in the Rajya Sabha. Though there are two secretariats, they coordinate on the use of common areas like the central hall, conference rooms and committee offices in the old Parliament house, and houses for members.

But, the formal control is with the speaker. (When the Rajya Sabha launched its own television channel a decade ago, it did not get space in the Parliament complex, but had to rent space in government buildings.) Thus, the speaker was present at the inauguration of the national emblem as the functional head of Parliament. 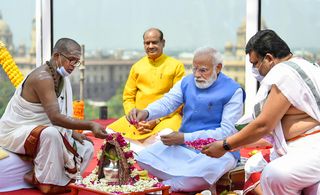 Secondly, the officials point out that under the order of precedence for ceremonial occasions, Naidu occupies the position between President Ram Nath Kovind and Modi. Hence, the presence of Naidu would have meant he would be the chief guest. But, both the speaker and the administrative department wanted the prime minister to launch the emblem as he was the initiator of the new Parliament house project. So, it was decided that only Birla and Puri would be present with Modi atop the complex, along with priests.

But, the order of precedence changes for specific occasions, like when the president arrives to open the joint sitting of Parliament—at the beginning of the new Lok Sabha term and during the budget session every year. He is escorted by the vice president and the speaker to the high podium, where the seat of the president is taller than that of the presiding officers. The prime minister, who is part of the procession, sits in the front row of the central hall.

When a new president is sworn in, the procession includes the outgoing president, the incoming president, the vice president, the Lok Sabha speaker and the chief justice of India who administers the oath of office. The Rajya Sabha chairman and the speaker are both included because the president is one of the three components of Parliament along with the Lok Sabha and the Rajya Sabha. In 1997, the vice president’s post was vacant because of the death of Krishan Kant. Therefore, the deputy chairman of the Rajya Sabha, Najma Heptulla, sat on the dais at the swearing-in ceremony of K.R. Narayanan, while prime minister I.K. Gujral was in the front row.