Main summit will be held in Delhi, while states will host minister-level summits

Before he leaves for foreign capitals, diplomat Harsh Shringla, who is coordinator for hosting the G20 leadership summit and the ministerial-level meetings of 19 major economies and the European Union next year, is now on a Bharat yatra. He has been entrusted with the mission to implement Narendra Modi’s vision to make 2023 a very special year by hosting the biggest congregation of world leaders in the country in this century. A bigger summit of non-aligned movement (NAM) leaders was hosted by Indira Gandhi in 1983, where 97 countries and two pro-independence organisations participated. There are only four countries common to the two summits—India, Argentina, Indonesia and Saudi Arabia.

But G20 is a different grouping than NAM, which was against aligning with the capitalist and communist blocs of that time. G20, which includes the highly industrialised countries and emerging economies, has been the most powerful bloc as it controls 80 per cent of global trade and 90 per cent of global GDP. Since the global economic crisis of 2008, India has been an active participant in the 16 leadership summits held so far, represented by only two prime ministers—Manmohan Singh for six years and Modi for eight years. 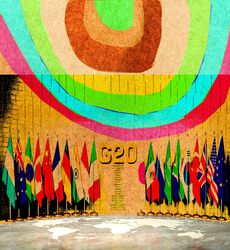 India will take over the leadership of G20 at its summit in Bali this year. Ignoring the recent trend of not holding the summit in a capital city, Modi has opted for New Delhi as the venue for the leadership summit. New Delhi is undergoing massive construction, with old edifices in the Pragati Maidan complex giving way to a mega modern conference venue. New Parliament and secretariat buildings are being readied, and the Central Vista from Rashtrapati Bhavan to India Gate is being transformed.

Modi, however, does not want everything concentrated in New Delhi. Therefore, the ministerial-level meetings, which precede the main summit in the winter of 2023, are to be held in as many states as possible. Indonesia, the current year’s host, is having three ministerial-level summits—finance, foreign affairs and employment—and 10 engagement group meetings. During the last 14 years, ministerial summits on trade, agriculture and tourism have been held occasionally. Commerce and Industry Minister Piyush Goyal is India’s sherpa for building the main summit agenda. But India now wants more ministerial summits to be held during its presidency, so that senior ministers of every G20 country would be involved. In addition are 10 engagement groups of government and private experts, meeting at different venues, which will give wide inputs to the leadership summit in New Delhi. That is the reason for Shringla’s national tour. Chief Minister Basavaraj Bommai stunned Shringla when he said that Karnataka was ready to host 10 meetings! But Shringla has more pitstops before the schedule is decided at a high-level meeting presided by Modi.

Vladimir Putin will be in focus at the summit, with the US, Canada, Japan, Australia and western European countries putting pressure on Indonesia not to invite him to Bali as punishment for invading Ukraine. But India, China, South Africa, Brazil and Turkey do not believe in exclusion of a major economy even by majority. Indonesian President Joko Widodo has said he will invite Putin, thus putting pressure back on the anti-Russian lobby on whether it should boycott only Putin or the summit. It is not the first time that Russia finds itself in the crosshairs. In 2014, Australia, as host of the Brisbane summit, wanted to keep Russia out, but BRICS countries issued a statement that no member could take a unilateral decision on another member.

Whatever be the political controversies, India wants to put its best performance as a global host in 2023.