When democracy is under trial

There was a flutter in political circles when courts in Maharashtra denied a day’s bail to jailed ministers Anil Deshmukh and Nawab Malik to vote in the Rajya Sabha elections on June 10. In a tight race between the ruling alliance and the opposition BJP for the last seat, the BJP candidate won, defeating the Shiv Sena nominee, thanks to the support of independent MLAs. The courts relied on electoral laws, which say that prisoners do not have the right to vote. However, every prisoner, except those who are convicted for a term of two years or more for specific offences, can contest elections.

The courts, meanwhile, are more careful dealing with applications of imprisoned MPs and MLAs when it comes to their right to vote in Parliament or state assemblies. Article 105 of the Constitution gives MPs the absolute freedom to speak and vote in Parliament and its committees, while MLAs are extended this privilege under Article 194. But since jailed members cannot be released for daily sessions, which would make a mockery of the order of judicial custody, the courts follow a golden rule. A day’s bail is granted in exceptional circumstances if a member has to vote in a confidence motion where the survival of the government is at stake. In 2008, when prime minister Manmohan Singh faced a vote of no-confidence, six MPs, including two sentenced to life imprisonment for murder, were released for two days. 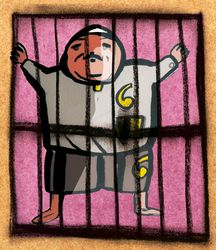 Such a crisis can also force political parties to bring to the house even those MPs who are on the sickbed as it happened during the vote faced by Singh. The BJP told speaker Somnath Chatterjee that it wanted to bring former prime minister Atal Bihari Vajpayee to vote. Chatterjee said Vajpayee could vote in the Parliament lobby where a full medical team had assembled. Finally, the BJP chose not to disturb Vajpayee as it realised that Singh had mustered enough numbers.

But a ticklish question arises when a large number of opposition MPs and MLAs are arrested by vindictive Central and state governments, accusing them of committing non-bailable offences. The opposition has been complaining that Central agencies are working overtime to put hostile lawmakers in jail. Such arrests could distort results of key elections. The Constitution says MPs and MLAs will vote to elect the president, while MPs alone choose the vice president. Similarly, it is the right of the MLAs to choose Rajya Sabha members from their states. In states with bicameral legislatures, MLAs also elect one-third of the members of the legislative council.

What if Central agencies and state governments conspire to send a number of elected representatives to jail before the presidential elections in July? The courts, faced with strong arguments from the prosecution, may wash their hands of the matter, saying that voting in a presidential election is not a fundamental right for the MPs and MLAs. Their hope then lies with the Election Commission which is expected to conduct free and fair elections.

Though the EC cannot permit voting by those in jail, it has the right to cancel or postpone elections. It has earlier cancelled elections in an entire state or in a particular constituency because its ground reports said voters would not be able to exercise their choice freely. But it is for the EC alone to determine what is the tipping point to make such an important decision.