Modi and Shah are on a mission to enfeeble the Congress, writes Sachidananda Murthy

These days, some junior functionaries of the media department at the BJP’s national headquarters in Delhi ask a question before the day’s work ends: “Which state will it be tomorrow?”. It is not about party affairs in a particular state, but about where the next big defector to the BJP is coming from. The answer is known when party president J.P. Nadda or one of the general secretaries lets out the name of the newcomer just before the official announcement at a media briefing. The team, however, knows early if the briefing is scheduled in a state office, as the new entrant would be from that region. These days, though, the answer is more often than not Gujarat.

Ahead of state elections later in the year, the party is in war mode in the home state of Prime Minister Narendra Modi and Home Minister Amit Shah. Both leaders have been frequenting the state to ensure that the party is in shipshape to fight the elections. They are inaugurating a slew of programmes aimed at specific sections of the electorate and closing gaps in the social coalition of the party, even as the new chief minister, Bhupendra Patel, is working on a clear script with his team of first-time ministers. 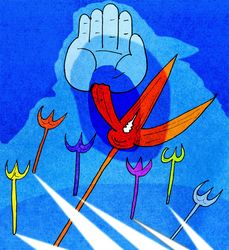 Apart from projecting development and expanding the BJP’s social base, Modi and Shah are on a mission to enfeeble the Congress, which has been the principal opposition in the state during the BJP’s uninterrupted rule of more than 25 years. The duo had planned and won elections as chief minister and senior state leader before moving to Delhi in 2014. But in 2017, the party, under Chief Minister Vijay Rupani, got a big jolt when the Congress threatened to end the reign—the BJP won 99 of 182 seats, barely winning a majority.

Compared with Modi’s triumphs in 2002, 2007 and 2012, this was poor. The prime minister was shocked to see that, just three years after he left the state, the party machinery had become wobbly under two chief ministers—Anandiben Patel and Rupani. The latter was retained as chief minister, and Gujarat became a priority.

That the party won all 26 seats in the state in the 2019 Lok Sabha elections was not consolation enough. The BJP high command worked with a single zeal to weaken the Congress; several of the latter’s MLAs were persuaded to resign and win byelections on the lotus symbol. The BJP also worked on persuading big community leaders like Hardik Patel at the state level and others at the district level.

Another setback for the Congress, though temporary, is the decision of veteran leader Bharatsinh Solanki to take a short break from active politics because of a family crisis. He has, however, promised to be back to mobilise votes for the party during the elections. The trickle of Congress defectors has become a stream in the past few weeks, and could become a torrent if Operation Lotus finds more success.

As politics abhors a vacuum, there are speculations that other forces may fill the space a weakened Congress might vacate. After some success in municipal elections, the Aam Aadmi Party is already fluttering its wings in Gujarat. There is also talk of the emergence of strong independents in some districts.