Sachidananda Murthy on Modi's U-turn on the sedition law

Narendra Modi’s adherents in the BJP marvel at how he comes up with surprises. While he is an excellent mind reader, it is difficult to read Modi’s mind. He pulled a surprise on his law minister and top officials when he asked them to reconsider provisions of sedition law. Union Minister Kiren Rijiju, Attorney General K.K. Venugopal and Solicitor General Tushar Mehta had to make a swift U-turn in their defence of the sedition law, reversing the government’s earlier stand that prosecution of Indian citizens on charges of treason was valid.

Modi wants a comprehensive re-look at the non-bailable law, under which dozens of activists were booked by the police and Central probe agencies like the National Investigation Agency. While Modi’s supporters hailed it as one more vindication of his commitment to liberty and democratic values, his critics, especially those facing relentless persecution under the sedition law, accused him of adopting a diversionary tactic to avoid a knock on the knuckles from the apex court.

Whenever the NDA government has been in a spot, it has promised a review, as it did in the case of demand for legal guarantee by agitating farmers for minimum support price for rice, wheat and other commodities. But the committee, which would give a detailed report to the government, has not yet been constituted. The government has asked the Supreme Court to drop the cases, which had reached the final round, until the comprehensive review was done for which no time limit was given. But the court had tough questions on government’s U-turn and its implication on all those who are under trial for sedition. 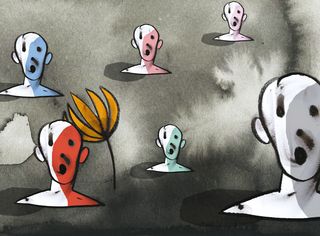 The continuous campaign by human rights activists has made several foreign governments ask the government to address fears that civil liberties were being trampled by the police, especially those controlled by the BJP governments. There is also international pressure as economy rating agencies have warned that India’s outlook grading would get lowered if threat to civil liberties by non-governmental groups continued without corrective action. This comes at a time when rupee has been under pressure due to international economic turbulence and inflationary pressures are building within the country.

Further, the sedition game is no longer one-sided, as opposition governments in Maharashtra and Punjab are using the same stick to fix pro-BJP lawmakers and activists, leading to an ugly confrontation between police forces over the arrest of BJP leader Tajinder Bagga from Delhi. The frequent use of sedition law flies in the face of claims that a strong government has reduced anti-national activities, and that there is major improvement on the law and order front.

It helps the prime minister that his party was at the vanguard of the struggle against internal emergency imposed by the Indira Gandhi government. While top leaders like A.B. Vajpayee and L.K. Advani had undergone preventive detention back then, a younger Modi had worked underground to fight the suppression of fundamental rights.

Modi has to ensure his core constituency is not disillusioned by any dilution of the treason laws, which would seem to favour “the tukde tukde gang and urban naxalites”, whom Modi attacked inside and outside Parliament. But whether the stunning change of mind to review the sedition law has come due to a genuine concern for liberal order or because of other circumstances, would be known only when the government finalises the changes to the sedition law, after the consultative process. No mind reading till then!