The new Punjab Chief Minister, Bhagwant Mann, made an overarching request for a special financial package of Rs1 lakh crore from Prime Minister Narendra Modi to bail out the state from its debt trap, which he says is Rs3 lakh crore. Mann insists this money is needed for making his state “rangeela [colourful] Punjab”. Metaphorically, several chief ministers would be shouting to the new entrant to the club that he should join the end of the queue of special package aspirants. Among them are Naveen Patnaik of Odisha, Nitish Kumar of Bihar, Mamata Banerjee of West Bengal and Y.S. Jagan Mohan Reddy of Andhra Pradesh. They all have failed to get special economic packages or special status from the Union government in the last two decades.

Each had given special reasons to justify the urgent need for funds, apart from fiscal mismanagement by their predecessors. Patnaik and Banerjee had pointed to the long-term neglect of the eastern region and how both their states and Jharkhand lacked infrastructure and had fewer employment opportunities. Kumar and Reddy have argued that after the bifurcation of Bihar and Andhra Pradesh, the more revenue-generating districts had gone to new states of Jharkhand and Telangana. But the three prime ministers of the 21st century—A.B. Vajpayee, Manmohan Singh and Modi—had a consistent stand of saying no to requests for special financial packages, even though Singh had promised that Andhra Pradesh would get special status. But then Singh lost power, and even though Modi was partnered by N. Chandrababu Naidu of the Telugu Desam Party, his government cited constitutional difficulties in granting the same—which made the TDP leave the NDA in 2018. Only the northeast states and the Himalayan regions of Uttarakhand, Himachal Pradesh as well as Jammu and Kashmir have special status, where the Union government bankrolls more of their expenditure, compared with the other states. 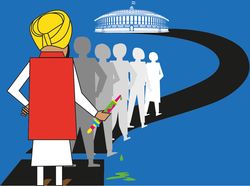 Arun Jaitley, who was finance minister for five years, had argued that the Union government had increased the share of states from the Central pool. He wanted the states to contribute to the Centre to meet partly the expenses for defence and internal security. Some of the states which have better revenue income—like Maharashtra, Tamil Nadu, Karnataka, Delhi, Gujarat and Haryana—have rarely made requests for special funds, though they have asked for funds for specific purposes like natural disasters and specific infrastructure projects in the roads and rail sector.

Nitish Kumar, who re-joined the NDA in 2016, has been frustrated that he has not got any special status. Reddy—who had unseated Naidu on the charge of failing to get special status for Andhra Pradesh—on the other hand, is under attack from Naidu for failing to get any extra money from the Centre. However, the Union government has argued that states across the line have benefitted from the Rs20 lakh crore stimulus package announced for meeting the Covid-induced economic crisis, and also from the extra funds allotted for the creation of health and vaccine infrastructure. The Union government has also relaxed the rules which allow states to borrow from private and foreign sources, but the states argue that these loans carry their interest burdens.

When new chief ministers complain of mismanagement of state finances by their predecessors, the NITI Aayog always advises prudent management of resources and cutting of freebies. But like all other new helmsmen, Mann, too, has announced money-guzzling schemes. Unlike the AAP-ruled Delhi—where a lot of expenses for land development, policing and national capital area management are paid by the Union government—Mann will have to manage with the funds the state government can generate.