Staying true to recent trends, the ongoing winter session of Parliament has seen clashes between an impatient government and an agitated opposition, resulting in more noise than informed debate. But even as the old parliament building is covered with fine dust from the construction of a new house, Parliament remains the last resort for groups of concerned people from across the country. Several hundred groups are jostling for permission from the police to articulate their grievances when parliamentarians are in Delhi. Dozens of marches are scheduled during the short winter session; there are also demonstrations at designated spots on Parliament Street, next to Jantar Mantar.

Some organisations are busy organising day-long discussions at congenial venues like the Gandhi Peace Foundation and the Delhi Press Club. The groups which seek the attention of the Narendra Modi government, the MPs and the media are diverse, ranging from a mother seeking justice for her murdered child to tribals who want a state called Tipraland to be carved out from Tripura. 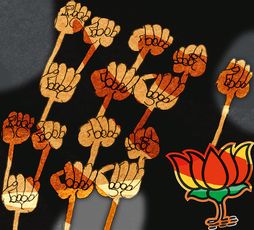 The second day of the winter session saw a group from Madhya Pradesh demanding an airport in Bilaspur, while another one from Kerala wanted the Kozhikode airport to be expanded. Jostling beside them were frustrated aspirants who were asking the Union Public Service Commission for a second chance. A group of teachers from Uttar Pradesh was protesting because the government was yet to confirm their jobs, a demand shared by anganwadi workers from Rajasthan. Some bank employees were protesting the move to privatise government banks.

Unlike in the past when a small delegation was allowed to visit Union ministers or officials to present the grievances, now the memoranda are collected by officers from the Delhi Police and the Intelligence Bureau, who also videograph the protesters. The memoranda are supposed to reach the particular ministries, but the police tell the demonstrators that they should send their grievances by email. A register is maintained to ensure that same groups do not occupy large spaces for many days. As access to the parliament building is difficult, most demonstrators depend on their MPs. Thus the protest sites attract dozens of MPs coming and making a brief address, posing for cameras and hoping that their presence will be noticed.

The retention of the protest sites so close to the parliament building has been a challenge for the police, who have tried in vain to shift the venues to far-off places. Covid protocols have ensured that not more than 200 persons are permitted at the sites, but the police prefer even smaller crowds.

Even as the protesters brave the harsh Delhi weather, the capital is also invaded by special interest groups and lobbyists who use the session time to take their MPs to ministers and officers. The MPs also tell delegations from their constituencies to visit Delhi to meet the decision makers, but the prime minister has been very selective about meeting delegations, which are keen on a photo opportunity and a handshake. Modi tells MPs that it is better they email their issues so that the PMO can take action. But for MPs used to bringing in delegations for enhancing their own standing among the voters, it is a let down.

The winter session also caught some groups by surprise because of the complexity of the Delhi government’s excise policy, which made premium brands of liquor difficult to get. Those who wanted the best brands had to go to neighbouring Haryana to keep the evenings warm. The Parliament session is nevertheless the time when issues of different regions get highlighted on the streets of Delhi, and some even reach the ears of the powerful.