Chief Justice of India N.V. Ramana is making more news through his public comments than his verdicts. In his latest expression of angst, Ramana said that the Parliament was producing poorly drafted laws because there were not enough intellectuals or even lawyers in the house.

He has obviously cast doubts on the rigour of intellectual debate among legislators. But, followers of parliamentary purity point out two other reasons. The government, whether the UPA or the NDA, laments that Parliament is forced to pass legislation without debate because of continuous disruption from opposition parties. In the last 20 years, the opposition has said that governments push bills through amid noise and do not even have the courtesy to refer them to the parliamentary standing committees. 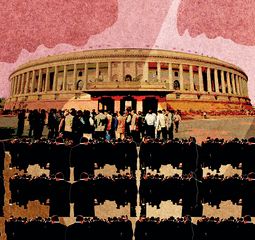 The Congress has accused Prime Minister Narendra Modi of “contempt for the committee system”, as less than 25 per cent of the bills during his seven-year regime have been referred to committees. During Atal Bihari Vajpayee’s six-year regime, 60 per cent of proposed legislation went to the committees. The chairmen of some of these committees like Jairam Ramesh, Shashi Tharoor or Bhartruhari Mahtab would be considered as belonging to the intellectual class. Furthermore, the current Parliament has many legal luminaries like Ravi Shankar Prasad, P. Chidambaram, K.T.S. Tulsi, Abhishek Manu Singhvi, Kapil Sibal and Vivek Tankha.

Legal heavyweights like Prasad, Sibal, Salman Khurshid, Arun Jaitley, Ram Jethmalani, Ashwani Kumar and Veerappa Moily have been law ministers. They oversaw the legislative affairs department, which reviews the government’s bills and rules. Yet, Ramana has found that the conceptualisation and drafting of the bills presented “a sorry state of affairs”, which has led to ambiguity and gaps. Ramana also found that much of the legislation passed by Parliament in recent years lacked clarity on the legislation’s purpose. His diagnosis may find many supporters among the critics of over legislation by successive governments. However, the cure prescribed by the CJI may be contentious. He wants more lawyers to come into Parliament.

In the first five Lok Sabhas, agriculturists dominated, followed by lawyers. But the composition changed with the emergence of Indira Gandhi and socialist parties. They brought in more “social workers” and “full time politicians”, even if they claimed to own land or possess a law degree. A study of the legal qualifications of Karnataka legislators in the 1990s found that several had acquired law degrees from evening colleges where attendance was optional. The professional mix in Parliament has also changed with doctors, engineers and management professionals competing with dynasts for a seat.

The pathetic state of legislative drafting has to be addressed at two levels. The government needs to appoint bright officials, including lawyers, for drafting legislation. Secondly, bills should be thoroughly discussed in public fora.

When Lok Sabha speaker Shivraj Patil introduced the standing committee system in the 1990s, he envisioned the committees functioning both as a miniature Parliament and an open court. He wanted them to invite domain experts and public delegations to give feedback on the good or bad effects of the proposed legislation, and officials of the concerned ministry to justify every word in the bill. The proceedings were made secret so that there would be candour and cooperation among members. Forged in the heat of public opinion and frank debate, the bills would be sent back to the government for reconsideration.