As the focus has shifted to the state governments for managing the second wave of the Covid-19 pandemic, the narrative on Centre-state relations developed by Prime Minister Narendra Modi over the last seven years is under stress. The aggressive centralisation drive which started with the ‘one nation, one tax’ slogan to adopt the Goods and Services Tax by co-opting the states was a remarkable effort at transforming India’s constitutional structure.

The subsequent years saw more such efforts like the ‘one nation, one ration card’ scheme by which people below poverty line could avail their share of food grains in any part of the country. There were schemes for the supply of energy through national grids and pipelines as well. From the heights of the Himalayas to the plains of Tamil Nadu, standardisation was planned and partly implemented, which was backed by an aggressive data bank of Aadhaar cards, Jan Dhan accounts, schemes for farmers and workers, and apps like the Aarogya Setu. The NITI Aayog dreamed of a system in which a command centre in Delhi would throw the switch to let supplies, cash and benefits flow. In the process, swathes of state bureaucracy dealing with taxation, food distribution and social welfare were to become redundant. Each ministry at the Centre dreamed of its own ‘one nation, one system’ model. The icing on the unitary cake was to be the ‘one nation, one election’ plan under which elections would be held simultaneously to Parliament, state assemblies, city corporations and village panchayats. 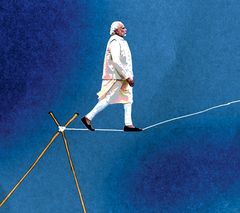 The Centre tightly controlled the response to the first wave of Covid-19 by micromanaging lockdowns, medical treatment and the economic stimulus package. It used the pandemic period to push through the agricultural marketing reforms, which were in the domain of the states. These amendments resulted in massive protests, leading to a long and continuing agitation on the Delhi borders.

But the response to the second wave of the pandemic has seen the Centre leaving decisions to the state governments, especially on lockdowns. The vaccine supply controversy has raised questions about the effectiveness of the Union health ministry and Central experts. The big victory of Mamata Banerjee, M.K. Stalin and Pinarayi Vijayan in the recently concluded assembly elections has boosted the opposition’s morale. The National Democratic Alliance is in power only in Uttar Pradesh, Bihar, Madhya Pradesh, Karnataka and Gujarat among those states which send more than 20 members to the Lok Sabha. Of the seven megapolises in India, only Bengaluru and Ahmedabad are ruled by the BJP, while non-NDA parties control Delhi, Mumbai, Kolkata, Chennai and Hyderabad. It will be interesting to see how the new realities affect Centre-state relations under Modi, who started in 2014 with an exhortation for cooperative federalism.