The first wave of Covid-19 mainly hit cities. The second wave, described by the prime minister as a storm, has reached even tier-four towns and hundreds of villages across the country. But urban areas are bearing the brunt as both government and private hospitals, and even general medical practitioners, are mainly located in cities and towns. The Union government is directly administering Chandigarh and major parts of Delhi through three agencies—the Delhi Development Authority, the New Delhi Municipal Committee and the Delhi Cantonment Board, administered by the urban development, home and defence ministries, respectively.

The urban development ministry has launched huge programmers under both the UPA (Jawaharlal Nehru National Urban Renewal Mission) and the NDA (smart cities) over the last two decades. But the pandemic has exposed the inadequacy of health infrastructure. Yet, the biggest noise from the urban development ministry is not about new hospitals, but for the ambitious Rs20,000 crore Central Vista project, which was conceptualised well before the Covid-19 crisis. Critics of the project, which will demolish a dozen well-known “Bhavans” of the government—Krishi, Rail, Udyog, Nirman, Sena, Vayu—that house key ministries, are demanding that it should be stopped and the money diverted for hospitals and health care. 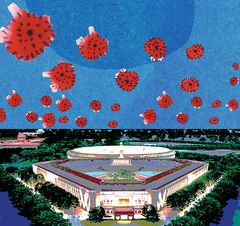 In Mumbai, there are demands that the ambitious Shivaji-statue-in-the-Arabian-Sea project, costing Rs3,500 crore, should be halted and the money used for the health sector. The Uttar Pradesh government is also pouring funds into the new Ayodhya city and a giant Lakshman statue in Lucknow. Earlier, the Gujarat government’s Statue of Unity project, too, had its share of critics.

But, the Central Vista project—which includes sprawling official residences for the vice president and the prime minister, and a new parliament house and convention centre—is urgently needed for the 21st century governance of India, where the government has grown to 51 ministries and the number of MPs will go up. Urban development minister Hardeep Singh Puri, who is piloting the project, which is the central public work department’s biggest ever, has harshly criticised the existing Bhavans of the Nehru and Indira eras as “ugly and unfit for a modern nation”.

Those in favour of the project do not agree that the money-guzzler is a vanity project and point out how it would repay the investment through energy savings and improved efficiency. There is also the argument that mega construction activity helps the wheels of the economy turn faster, generating jobs and profits for businesses, big and small.

Despite the Covid situation, Puri’s ministry has refused to pause the project as it has a tight deadline to get the new parliament house functional (2022). Moreover, all Union ministries have to move into new buildings a year later. Reportedly, on April 16, the Central Public Works Department designated the project an essential service and informed the Delhi Police that work will continue “during all three shifts”.

When the prime minister and his team face the 2024 elections, they would have the satisfaction of having remoulded much of the controversial Lutyens Delhi (which was completed in 1927 during the British rule). For the next three years, central Delhi will reverberate with the noise of construction, drowning out the noise of the project’s opponents.