The end of election campaigning in Bengal could bring the long-running farmers’ agitation on Delhi’s borders back to the top of the Central government’s agenda. The crowds have dwindled though; the bulk of the agitators—mainly from Uttar Pradesh, Punjab and Haryana—had returned to their villages for the kharif season. The 11th and the last round of the negotiations between Agriculture Minister Narendra Singh Tomar and the conglomeration of farmers’ unions was held on January 20 when the government stuck to its offer of suspending three new agricultural laws, while the unions wanted a total repeal. Tomar made it clear that another round of talks would be justified only if the farmers were flexible. The violence that followed the meeting—including the storming of the Red Fort six days later, on Republic Day—queered the pitch as the Delhi Police targeted union leaders for instigating violence.

Though Parliament met for lengthy sessions in February and March, the government remained firm, refusing to heed the opposition’s demands for repealing the laws. Soon, the government and the major political parties got busy with the assembly elections in five states in March and April. Even the Supreme Court could not make any headway. Though it appointed an experts’ committee, it was not acceptable to the unions. The court did thunder about the need to clear highways, but it did not order an eviction. The Centre and the Uttar Pradesh and Haryana governments, too, refrained from using force to remove the agitators. The Haryana home minister, however, wants to vaccinate the agitating farmers against Covid-19. 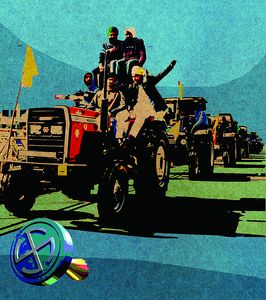 The end of the agricultural season and the election season in early May would see the return of the agitators, who have announced a foot march to Delhi. Tomar and Food Minister Piyush Goyal have been in regular touch with them since the negotiations failed, but they are yet to get any direction from Prime Minister Narendra Modi to offer any further concessions. There have been informal discussions among BJP leaders from Punjab and Uttar Pradesh on solving the issue soon, as both states will have assembly elections next year, along with Uttarakhand.

In Punjab, the Akali Dal, a BJP ally from its Jana Sangh days, had left the NDA opposing the three “black” laws. Both parties have suffered after this separation. There are suggestions that Modi himself should reach out to Parkash Singh Badal, the Akali patriarch, for a solution. If they go separate ways, it would be a big advantage for the Congress and Chief Minister Amarinder Singh.

Similarly, in western Uttar Pradesh, the restlessness among farmers would affect the BJP’s mass vote base, which immensely helped it in two Lok Sabha polls and one assembly election between 2014 and 2019. But, the rigid stands of the Central government and the farmers’ unions need to be re-evaluated if there is to be a cool solution in Delhi’s searing summer heat.