Sachidananda Murthy: Why the BJP will keep wooing Ganguly

Sourav Ganguly has made it clear that he is not in the electoral or even the political arena. Despite this, leaders such as Prime Minister Narendra Modi, Home Minister Amit Shah, Defence Minister Rajnath Singh and BJP president J.P. Nadda have brought up the BCCI president quite often in their campaign speeches in West Bengal. Singh, whose main interest is agriculture and party organisation, apart from his administrative experience in the home and defence ministries, has waxed lyrical about Ganguly’s shot-making. He has said that his party’s performance against the Trinamool Congress would be like Ganguly hitting bowlers to all parts of the ground. In another rally, he said the BJP would hit sixes like Ganguly.

The former India captain is the second biggest star the BJP has failed to woo in these assembly elections. At least the bigger star—actor Rajinikanth in Tamil Nadu—kept the BJP on tenterhooks. He announced the launch of a party, praised Modi and held long talks with an RSS interlocutor. But he withdrew citing health reasons, dashing the BJP’s hopes of hitching its wagon to Rajini’s party for an electoral stunner in the south. With yesteryear star Vijayakanth’s Desiya Murpokku Dravida Kazhagam exiting the National Democratic Alliance, the BJP has lost its last cinematic glitter in Tamil Nadu. 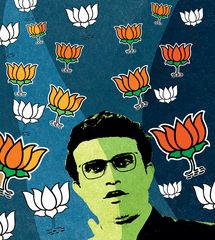 Ever since Modi and Shah identified Bengal as their big target, Ganguly was among the top names the party wanted. The former captain, who had maintained equable relations with Left Front chief minister Buddhadeb Bhattacharjee and then with Mamata Banerjee, was seen by the BJP as the ideal leader; he would appeal to the youth and the women of Bengal. He had a heroic reputation as player and captain, and his handsomeness would appeal to both the young and the middle-aged.

But, like his illustrious ODI opening partner Sachin Tendulkar, Ganguly was friendly with all parties, but would not pad up for anyone. The other two members of India’s famed ‘fab four’—Rahul Dravid and V.V.S. Laxman—have remained politically aloof.

The BJP has roped in many film stars like Mithun Chakraborty and lesser cricket stars like Ashok Dinda, but no one matches the glamour of Ganguly, who effortlessly took control of the Cricket Association of Bengal before moving on to the BCCI. When Shah’s son, Jay, became BCCI secretary, there was speculation that Ganguly would join the ruling party at the Centre. But Ganguly kept smiling and refused to commit.

Both Rajinikanth and Ganguly had bouts of illness ahead of the elections. And leaders of major parties, including Mamata, made a beeline for the hospital to wish Ganguly well.

Even if he keeps his lips sealed till the eighth phase of polling in Bengal, BJP campaigners like Singh would invoke his name. If nothing else, this would garner applause from those who admire the cricketer and
the BJP.