At one level, there was nothing unusual about the importance given to former Chhattisgarh chief minister Raman Singh when the BJP’s national office-bearers met physically after a year. Singh, who had ruled Chhattisgarh for 15 years before losing elections to the Congress in 2018, is the first in the BJP’s list of 12 vice presidents. He was thus the primary speaker on a resolution applauding Prime Minister Narendra Modi’s leadership during the Covid-19 and economic crises. He enumerated the “historic” and “visionary” decisions taken by the government—developing personal protective equipment, drugs and vaccines; passing three agricultural reform laws; amalgamating public-sector banks; and bolstering Atmanirbhar Bharat.

In Chhattisgarh, there is cheer among Singh’s supporters that he could be on the comeback trail, as far as his favourability in the party is concerned. Singh and fellow chief ministers Vasundhara Raje Scindia of Rajasthan and Shivraj Singh Chouhan of Madhya Pradesh had lost their states to the Congress in the 2018 assembly elections, denting the formidable electoral juggernaut built by Modi and Amit Shah. While Chouhan’s loss was narrow, both Singh and Vasundhara had lost by big margins. Singh lost even his own assembly seat. 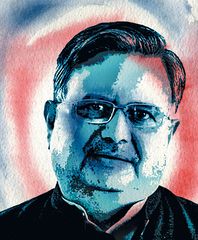 The trio, apparently, had lost the knack for winning—a big offence in the party’s new success code. Though Chouhan and Vasundhara had won their assembly seats, they were not made leader of the opposition in their states. And, in a ‘surgical strike’, all 10 party MPs in Chhattisgarh, including Singh’s son Abhishek, were denied tickets to contest the Lok Sabha elections in 2019.

As the erstwhile first family of Chhattisgarh went into political eclipse, there was talk of a new leadership being groomed—as Modi had done in Uttar Pradesh, Maharashtra and Haryana. But Singh stayed below the radar, without getting provoked by either his party rivals or taunts from the Congress. He allowed those who took the reins of the party, both within and outside the assembly, to reveal their limitations.Meanwhile, as the faction-ridden Congress in Madhya Pradesh imploded, Chouhan’s stock rose as the most experienced leader who could manage not only the restive BJP factions, but also the large group of incoming defectors from the Congress who were loyal to Jyotiraditya Scindia.

The elevation of J.P. Nadda as the BJP’s national president has given confidence to the party’s veteran warhorses to get back into the reckoning. But in Rajasthan, though, the rift between Vasundhara and her detractors has been deepening. The MLAs supporting her recently alleged that the denial of tickets to her supporters in Kota had benefited the Congress in the local body elections. Earlier, when the Congress was rocked by Sachin Pilot’s rebellion, the anti- Vasundhara faction in the BJP had kept hinting that she was not keen on toppling Chief Minister Ashok Gehlot.

She is the most senior vice president of the BJP after Raman Singh, followed by Raghubir Das of Jharkhand, another former chief minister who lost the elections. It will be interesting to see whether Singh and Vasundhara would be considered when Nadda fills the three seats that have long been vacant in the party’s powerful parliamentary board. Many leaders in the party, young and old, are in contention. Chief Ministers B.S. Yediyurappa of Karnataka and Yogi Adityanath of UP have not made it to the board, even though Chouhan is a member.