The Biju Janata Dal is a party that avoids controversies, furrowing its own middle path in national politics. Led by the charismatic Odisha Chief Minister Naveen Patnaik, the party strongly opposes both the Congress and the BJP at the state level. At the national level, it has had a more constructive approach towards both the United Progressive Alliance and the National Democratic Alliance governments.

After being part of Atal Bihari Vajpayee’s NDA for 11 years, Patnaik left the rightist coalition ahead of the 2009 Lok Sabha polls when the BJP was led by L.K. Advani. The BJD, which has won five consecutive assembly elections, sends a sizeable contingent of members to both the Lok Sabha and the Rajya Sabha. Its members avoid noisy tactics like disruption of the houses, doing dharna in the well of the house or staging walkouts, preferring to make their points in debates, even if the main opposition is absent. 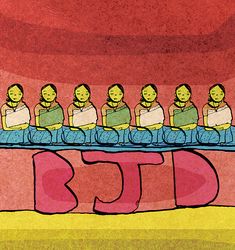 In the last two decades, its leading members like Bhartruhari Mahtab, Pinaki Misra, Tathagata Satpathy (now out of electoral politics), Baijayant Panda (now in the BJP) and Kalikesh Singh Deo have made constructive contributions in Parliament and its committees. There is more reason and less passion in their speeches as the party takes debates very seriously, emulating the serious demeanour of the party supremo himself.

Apart from vigorously pursuing higher monetary allocations for Odisha and demanding its entitlements of mineral royalties and interstate river waters, the BJD has been vocal about the passage of the women’s reservation bill. The bill proposes to amend the Constitution to reserve 33 per cent seats for women in the Lok Sabha and legislative assemblies. This affirmative action has been an ideological badge for the party, where its leaders invariably ask the government of the day to take steps to complete the process. Its MPs also lobby their counterparts in other parties to support the move. Congress president Sonia Gandhi, who had pushed hard for the legislation when the UPA was in power, regularly responds to their calls. But the response from the BJP and most regional parties has been lukewarm.

The BJD itself has been unable to implement one-third quota for women in its tickets for national and state elections, as other parties put up stronger male candidates in most constituencies. Hence, its critics say there is a mismatch between rhetoric and action when it comes to women’s representation in the state.

The women’s reservation bill had seen angry reactions when the Manmohan Singh government sought its passage in the Rajya Sabha; seven members were suspended for unruly behaviour. But a near consensus involving the Congress, the BJP, the left and several regional parties saw the bill being passed by a big majority.

Even so, there were strong misgivings among MPs of both the major parties, and though Singh was in power for four more years after the success in the Rajya Sabha, his government could not get it passed in the Lok Sabha. Among the strong opponents of the bill were Bihar Chief Minister Nitish Kumar, a crucial ally of the BJP, and West Bengal Chief Minister Mamata Banerjee, a rival of Prime Minister Narendra Modi.

Despite the NDA’s majority in the Lok Sabha since 2014, the government has not considered the women’s reservation bill a legislative priority. The BJP has argued that Modi has given ministerial positions to the highest number of women in any Central government, entrusting some with crucial portfolios like finance, defence, external affairs, human resource development, and commerce and industry.

Even if there is less enthusiasm in the government, the BJD will continue to press for better gender parity through legislative representation in its own gentlemanly ways!