The owners of the Indian cargo ship MV Jag Anand and the 23 Indian sailors on board had no intention of making headlines when they set sail from Australia early last year. They had been operating at the height of the pandemic, to keep earning their livelihoods at a difficult time when international shipments had come down and crews were stranded.

The Jag Anand was carrying coal from Australia to the Chinese port of Jingtang. By June, relations between China and Australia had become an ugly contest of abuses and sanctions over trade and human rights. The Chinese simply kept dozens of ships flying different flags anchored at the sea, denying them permission to dock.Coal is non-perishable, but the sailors wilted. After a delay of weeks, most ambassadors managed to get berths for ships flagged in their countries. But the Jag Anand remained moored, even as India’s Ambassador to China, Vikram Misri, got kind assurances from China. Even permission to change the crew was denied. The face-off in Ladakh had made the Chinese government frosty. The sailors had become unwitting pawns in an international spat.

On September 20, another Indian ship, MV Anastasia, with 16 sailors on board, was told to anchor off Caofeidian port in China. Anastasia, too, was carrying Australian coal. 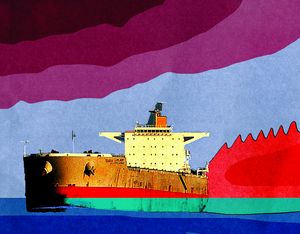 Three months later, Australian naval ships sailed in to the Bay of Bengal to join the navies of India, Japan and the US for the Malabar exercise held as part of the Quadrilateral Security Dialogue (Quad). All countries indicated that the grouping would contain Chinese adventurism in the Indo-Pacific. Even though the navies dispersed in November, it took another six weeks for China to relent to Indian pleas.

The Jag Anand has now moved to a Japanese port with the Australian coal still in its belly. The crew will get an air ride to India. Shipping Minister Mansukh Mandaviya and External Affairs Minister S. Jaishankar, who negotiated with their Chinese counterparts for freeing Jag Anand, are now focusing on the Anastasia.

Though the number of cargo vessels flying the Indian flag is few, Indians constitute the fifth largest nationality among seafarers. They prefer the glamorous name of merchant navy to describe their profession. There are at least two lakh seafarers in India who spend months away from home facing various dangers. In the past two decades, more than 2,000 Indian seafarers have been abducted by pirates and released after undergoing terrible hardships. Shipping companies pay ransom to get their crew back, even though international efforts have increased to combat piracy. The Indian Navy operates its ships and surveillance aircraft along the dangerous coasts off Somalia and Yemen, as well as in the narrow Malacca Strait, where large cargo vessels are slow-moving targets for raiders in fishing boats.The notorious Somalian coast has been free of pirates for the past two years. The most dangerous place now is the Gulf of Guinea in west Africa, which comprises 13 countries. Two months ago, four Indians were among 10 seafarers abducted from a ship off Nigeria.

Despite the dangers, the seafaring profession continues to promise adventure and good income. Hence the admission rush to 130 maritime colleges in India, which teach students everything from engineering to laundry work―all in demand on the high seas. A fresh lesson, perhaps, can be had from the experience of sailors aboard the Jag Anand and the Anastasia: there is a new Cold War gripping the Indian and Pacific Oceans.