Tweak in the tale

Even though the Narendra Modi government has insisted that the bipartisan nature of the Indian-American relationship is immune from any negative fallout of leadership change in either country, there is great interest in New Delhi in the foreign policy priorities of the Joe Biden administration.

The rapport between Modi and Donald Trump, who staged stunning joint shows in Houston and Ahmedabad, resulted in many convergences, especially against China. Trump was supportive of Modi’s decisions on Kashmir, and Modi lent support to Trump’s economic sanctions on Iran. The four-nation strategic alliance of India, the US, Japan and Australia has led to military and intelligence cooperation. If there was no pandemic, leaders of the four countries would have had a summit. 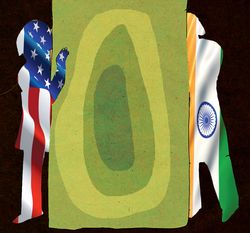 New Delhi also benefited from Trump’s rapport with his ambassador to India, Kenneth Juster, who helped smoothen American belligerence on trade issues. Now Juster will be leaving and there is no indication about Biden’s preference for the crucial Delhi assignment. But India has an accomplished team of diplomats in the US led by Ambassador T.S. Sandhu, who has strong contacts in the Democratic policy group as well as in the Congress. But some of the progressive members of the house, including the Indian American representatives, have a perception that the BJP and the Republicans were far too thick friends.

While bilateral relations are expected to be smooth—the foreign policy team of secretary of state nominee Antony Blinken has emphasised the importance of India—the focus would be on how different the Afghanistan-Pakistan policy would be under the new administration. Trump’s treaty with the Taliban had made India feel that America would give the advantage to Pakistan in the long run, after withdrawing its troops from Afghanistan. Trump’s special envoy for Afghan reconciliation, Zalmay Khalilzad, had persuaded India to shed its touch-not-Taliban attitude that had been adopted after the hijacking of the Indian Airlines flight IC 814 in December 1999. Unlike the Obama administration, Trump’s foreign policy team had given more importance to Pakistan because of Islamabad-Rawalpindi’s strong ties with the Taliban. Now India is waiting to see what changes Biden will bring.

Similarly, Biden’s commitment to engage with Iran on its nuclear programme, which would restart the Obama policy abandoned violently by Trump, would be of relevance for India. The Modi government has moved closer to Iran’s regional opponents like Saudi Arabia, the UAE and Israel, although it has not joined in the rhetoric against Tehran. If Biden focuses more on Europe, Russia and the Middle East, there is great curiosity on whether he will be as bellicose towards China as Trump has been.

On economic issues, Biden has indicated that he would like to rebuild the bridges of international trade, which were damaged by Trump’s aggressive America First policy. But India is keen to know how committed Biden is towards rebuilding the World Trade Organisation and reviving other multilateral agreements.

There is one area where Trump and Modi sharply differed. Modi believes that climate change is a genuine global threat and has committed India to mitigating its bad effects by word and deed. Trump thought the whole hubbub on climate was a hoax to sabotage the American energy sector and pulled the US out of the Paris agreement. Now Biden has named the old India friend John Kerry as his special envoy for climate and this would be a fruitful partnership.

Overall, it is time for a different tango between the two big democracies.