The adjective ‘idiosyncratic’, meaning an individual whim or fancy, appears just four times in the Reserve Bank of India’s 308-page annual report, which was made public a fortnight ago. But it was enough to make senior bureaucrats and economists in Delhi share the report online and discuss the implications, as the word is used to criticise policies that contributed to economic slowdown in the last five years.

Decisions taken by key economic ministries like finance, transport, ports, coal and civil aviation came under the scanner. The report notes that the enforcement of emission and axle load norms for commercial vehicles was an idiosyncratic event. The decision was announced and implemented by the transport ministry, but the deadlines were rigidly enforced by the Supreme Court. Listed among domestic and global idiosyncratic factors are the grounding of a domestic airline (Jet Airways), financial sector stress, revenue issues in telecom sector, coal production losses impacting railway freight traffic and lessened port activity. 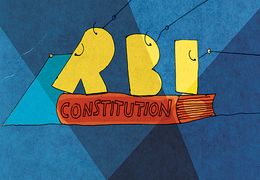 The candid report by RBI Governor Shaktikanta Das lists the “formidable drags” that led to the slowdown from 2018 itself, weighing heavily on “animal spirits” of entrepreneurship and risk-taking. Using the virus analogy, the report warns that the usual risks that are relegated to the background—due to the stimulus packages of the Central government and the RBI—“may be sinisterly mutating”, thereby predicting newer economic viruses that would plague the country even after the vaccine is administered to the population. Barring this warning, the report is a continuous commendation of the RBI’s responses initiated since early 2019. The report also lists out steps to be taken to put the economy and the banking system back on track. The RBI’s prescription is monetising assets of the Centre in steel, coal, power, railways and ports, which has already been announced as part of the Rs20 lakh crore stimulus package.

The RBI’s thumbs-up for privatisation came just a few days before the death of Swami Kesavananda Bharati, who was associated with the 1973 Supreme Court judgment on basic structure of the Constitution. It was a judgment that changed not just the law but politics itself. But the pontiff, who focused on spirituality and music, was fighting for the citizen’s fundamental right to property, in order to prevent the Communist government of Kerala from taking over the mutt’s lands. The Supreme Court registry had clubbed his case with the appeals of some businessmen who were fighting nationalisation of their assets by the leftist government of Indira Gandhi. It became a fight for the control of the nation’s political and economic soul.

After defeating the grand coalition in 1971, Indira Gandhi went on a nationalisation spree. The grand coalition was made up of the rightist Bharatiya Jana Sangh and Swatantra parties, the left-of-centre socialists and the rightist syndicate faction of the Congress, and was supported by privilege-stripped maharajas, land-owning classes and private businesses.

While privatisation of the nationalised sectors began with the 1991 economic reforms of a Congress government, the second wave of ambitious privatisation is being undertaken by the Narendra Modi government. The aim is not only to monetise the state assets but also to make an ideological statement on privatisation of property, which would have thrilled the petitioners and their backers in the Kesavananda Bharati case.

But it was the genius of the Supreme Court of that time that took a dispute on property ownership to answer the larger questions of the Constitution and its unalterable basic structure, of which an independent Reserve Bank of India is a vital part.