After ruthlessly launching the Rajasthan Police against his own party’s ministers and MLAs, Chief Minister Ashok Gehlot has hurriedly withdrawn the general permission given to the Central Bureau of Investigation to take up cases in the state. The order came just when it seemed that the Centre was going to transfer to the CBI an audiotape case against Union Minister Gajendra Singh Shekhawat and some MLAs, which was being probed by Rajasthan’s Special Operations Group.

The Gehlot camp insisted that it had ordered the SOG investigation to expose an “unholy nexus” between the BJP and Congress rebels led by Sachin Pilot. It also alleged that the Centre was misusing the Enforcement Directorate to raid two businessmen friends of the chief minister’s family. But, the BJP argued that the ED raids sought to expose rampant corruption around the chief minister. 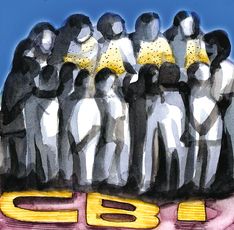 One of the cases that the CBI is investigating in Rajasthan involves the Olympian discus thrower Krishna Poonia, who is a Congress MLA. She is accused of pressuring a police officer in Churu district who killed himself.

The CBI has long been at the centre of a tussle between the Union government and states. A few years ago, West Bengal, Andhra Pradesh and Chhattisgarh withdrew consent for CBI operations. However, Andhra Pradesh cancelled its decision after Jagan Mohan Reddy replaced N. Chandrababu Naidu as chief minister in 2019.

It was in 1977 that the CBI was denied investigative freedom in a particular state for the first time. The Janata Party government at the Centre had at that time decided to act on a corruption charge-sheet against Karnataka chief minister D. Devaraj Urs of the Congress. He quickly withdrew permission to the CBI and appointed an inquiry commission headed by former High Court judge Mir Iqbal Hussain. The Centre appointed its own commission, headed by retired Supreme Court judge A.N. Grover. The apex court ruled that the Grover commission had the sole right to probe the charge-sheet. But, Grover could not use the CBI as Urs had withdrawn permission.

Gehlot’s preventive action would not stop the Centre from using other agencies. The NIA is under the Union home minister, and the ED and the income tax department are under the Union finance minister. Until the 1970s, the CBI was part of the home ministry. But, the prime minister’s office felt it gave too much power to the home minister, so the agency was placed under the department of personnel and training, which is under the prime minister. Later, the Supreme Court gave supervisory powers to the Central Vigilance Commission, to provide autonomy to the CBI. However, the three vigilance commissioners are appointed by the Central government.

The Congress alleged that Central agencies were “skilfully” used to topple its governments in Madhya Pradesh and Karnataka. If Gehlot survives Pilot’s revolt, he would be in a strong position to take on the Centre, which may bide its time. For now, CBI teams can continue to work on cases in Rajasthan that are already registered and have been referred by the Jodhpur High Court or the Supreme Court.