Even as Indian diplomats posted abroad are busy coping with the public health crisis, the external affairs ministry is readying its response for important shifts in the political landscape of Asia. The ban on travel into India, even for Indian citizens, from more than 75 countries has stranded millions of workers and tourists, so the embassies have been asked to work overtime to ensure that there is support for those who are stuck.

The change of government in Malaysia has come as a positive development, after the recent ousting of prime minister Mahathir Mohamad, who was critical of the Indian government’s decisions on Kashmir and the citizenship law changes. The nonagenarian leader had also rallied other critical countries like Pakistan and Turkey to join the chorus against the policies of the Narendra Modi government on Muslims. Even though a travel ban has been imposed on Malaysian flights, the embassy has reached out to new prime minister Muhyiddin Yassin, and has explained the steps taken to ease the situation in Kashmir. Even as Malaysia has been muted in its criticism of New Delhi after the change of government, there is concern about neighbouring Indonesia, which also has a minority Hindu population. There have been demonstrations against the Indian government policies towards the Muslim population, and some fringe groups issued threats to the Indian embassy in Jakarta. 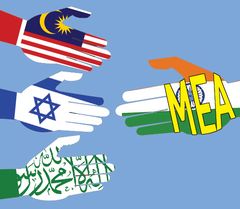 While the government of president Joko Widodo has assured full security for Indians there, his officials have conveyed the concerns in the archipelago about new policies of the Indian government. Malaysia and Indonesia, who are members of the Association of Southeast Asian Nations (ASEAN) are also unhappy with India for not joining the Regional Comprehensive Economic Partnership (RCEP), which would have helped them to access the huge Indian market. Though Prime Minister Modi had China in mind when India pulled out of the negotiations with 15 countries, political efforts have to be doubled to assure the Indo-Pacific countries that India is economically with them.

Another development is in Israel, where after a third hung election, the president has asked opposition leader Benny Gantz to try to form the government, after long-term prime minister Benjamin Netanyahu failed to get the majority. Gantz has the support of legislators from the Palestinian region, and there are questions as to whether they would influence a change in Israeli policy towards India. Netanyahu and Modi have had an excellent personal rapport, though India has also reached out to the Palestinian leadership regularly.

The third development in the region is the agreement between the US and the Taliban about changes in Afghanistan, including the participation of the Taliban in the Afghan government. India, which has so far refused to talk to the Taliban, did send the Indian ambassador to Qatar for the ceremony where the agreement was signed. But, there is fierce division in the strategic community on whether India should reach out to the Taliban. Some say the whole world, including the United Nations, has recognised the agreement, which shows the Taliban has evolved from its brutal avatar during the hijacking of the Indian Airlines aircraft in 1999. But, there is also an argument that India should be consistent with its stand of the past two decades that the Taliban should sever its linkage with Pakistan, which is the “epicentre of global terrorism” and would not hesitate to use the Taliban, whose Haqqani network is accused of being an agency of Pakistan’s ISI. The plate is quite full for the external affairs ministry in these months of global emergency.