A perception about the top leadership of the BJP is that compared with the tough-mannered Narendra Modi and Amit Shah, Transport Minister Nitin Gadkari is less hawkish and more accommodative. Gadkari, who comes from a business background, is more of a go-getter, who has avoided harsh language towards the Congress and other opponents.

But a circular from the transport ministry to all state governments shows that Gadkari, too, can be considered a part of the kettle of hawks in the saffron party. Gadkari, who had pushed for tough changes in motor vehicle laws to impose very high fines on offenders, was upset that some states had refused to implement the new fines. BJP-ruled Gujarat was the first such state. Chief Minister Vijay Rupani unilaterally announced a drastic reduction of Parliament-fixed fines to assuage angry motorists, as compounded fines were sometimes more than the price of the vehicles. 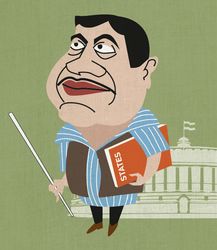 Gadkari firmly believes that India has to adopt the foreign model of heavy fines for reckless driving to stop the rising tide of fatal road accidents. Even as he pushed for superhighways on which motorists could zoom at higher speeds, the minister wanted zero tolerance towards reckless and criminal driving. When he pushed for changes in the law, he was happy that there was a consensus among state governments that it was high time for the era of light punishment to end. Thus, there was a 10 to 20 fold increase in fines in the law approved by Parliament.

But, as police and transport officials began imposing the high fines three months ago, chief ministers began panicking at the reaction of drivers in their states. Rupani and others thought the fines had been devised by activists who did not care for the financial burden placed on vehicle owners and drivers. While some states reduced the fines, others told the enforcement officials not to be zealous in prosecuting errant drivers for multiple offences. The defiance came when the NDA government at the Centre was riding high on the big majority it received in the 2019 Lok Sabha elections. Gadkari was firm that the states had no business in diluting the new fine regime and advised the states to comply with the law.

He was not satisfied with just sending the advisory. Now, he is armed with the legal opinion of the hawkish Attorney General K.K. Venugopal, who was asked to decide whether state governments had the power to defy a law passed by Parliament. Venugopal, after studying the constitutional implications, has advised that the states had no powers to defy the Central law unless the deviation was done by a law passed by the state legislature, which was approved by the president on the advice of the Union cabinet. Venugopal also said that the states which reduce fines without such legal empowerment can face action under Article 356 of the Constitution, which provides for dismissal of a state government for violating the Central law.

The invocation of the dreaded Article 356, which has been used by the Centre to dismiss many state governments since the 1950s, would be a red flag for opposition-ruled states. Already, the Kerala assembly has passed a resolution against the implementation of the controversial amendment to the Citizenship Act, and several states have announced they would not be implementing the National Population Register. The tough legal opinion of the attorney general is an assertion that the supremacy of the Central government dominates the federal system, but becomes another flashpoint between the BJP and its political opponents ruling some of the states.