Leaders like Union minister Giriraj Singh, and MPs Adhir Ranjan Chowdhury (Congress), Pragya Thakur and Ananth Kumar Hegde (both of the BJP), Azam Khan (Samajwadi Party) and Sanjay Raut (Shiv Sena) attract cameras and recording devices, as they are more likely to give controversial statements than other “dull” leaders.

Sometimes they are stalked more than even chief ministers and senior Union ministers. Despite their parties and well-wishers counselling them to be careful in articulation, these political leaders hold forth, especially when they see large crowds or cameras. 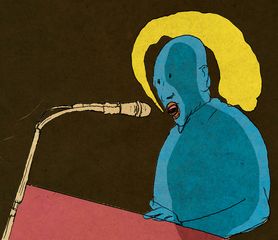 They also tell the tale depending on the audiences. Hegde is known for his uninhibited style, and tells the truth as he perceives it. He explained that the BJP’s disastrous nocturnal attempt to form a government in Maharashtra was an attempt to preserve Rs40,000 crore of Central funds under the chief minister’s control, which a coalition government would misuse. The 80-hour chief minister Devendra Fadnavis was aghast at this, as the message went horribly wrong. Instead of being the saviour of a big pot of money, Fadnavis was seen as a master of financial skullduggery, acting against the interests of the state.

Earlier, when Prime Minister Narendra Modi made Hegde junior minister for skill development, he told petitioners requesting help: “This ministry is like a well without water.” Hegde is among the few MPs who prefer the Parliament library to the noisy central hall inhabited by MPs, former MPs and senior journalists. A Lok Sabha member since 1996, with a one-term break, he tells the opposition voters they need not even come to listen to him, and that he does not need their votes. Addressing an enthusiastic upper caste audience as a minister, he had declared that the BJP was voted to power to change the Constitution. As the occasion had been a conference against reservations in jobs and education, Hegde’s remark was seen as a deep RSS-BJP plot to dismantle the Ambedkarian legacy, forcing the Modi government to hastily insist that it had no such plans. But Hegde, like the other controversial remark-makers in the party, has the admiration and backing of a big section in the BJP and the RSS.

Chowdhury has been pitchforked to a major opposition role in the Lok Sabha, though his party lacks the numbers to get him recognised as the opposition leader. In a rhetorical flourish to attack the Citizenship Bill, Chowdhury described Modi and Amit Shah as migrants from Gujarat, forgetting that all Parliament members come to the capital from their states. Congress managers have been briefing the West Bengal politician to moderate his free-to-air viewpoints, both inside and outside the Lok Sabha.

Even the communist parties, which train and discipline their members well, have to deal with the odd leader who makes controversial headlines, like Kerala’s CPI(M) minister M.M. Mani. However, two leaders in recent times had ensured total obedience. The first was J. Jayalalithaa who forbade her party leaders from making comments, and even had the speeches made by party MPs in Parliament faxed from her Poes Garden residence. Then it is Bahujan Samaj Party supremo Mayawati, who exhibits instant displeasure at any leader making a comment without her clearance. MP Danish Ali, who quit the Janata Dal (Secular) to contest and win from Uttar Pradesh on a BSP ticket, learned this quickly. He was appointed leader of the BSP group in Lok Sabha. But when he made some remarks without prior clearance, he was dropped as leader. After amends were made, he was forgiven and made leader again!