Prime Minister Narendra Modi has led the Indian tribute to former French president Jacques Chirac, the world statesman who turned the tide in favour of India after the nuclear tests by the Atal Bihari Vajpayee government in May 1998. Even as India was declaring itself a nuclear weapon state, the country became a nuclear pariah under the Nuclear Non-Proliferation Treaty (NPT), which India always refused to sign as it was unequal. Chirac, known as Le Bulldozer, demolished the arguments for sanctions against India, which were imposed by the United States under NPT. Modi has hailed Chirac as a “friend of India who played a decisive role in establishing and building India-France Strategic Partnership”.

Chirac, known in his forties as one of the jeunes loups (young wolves) of French politics, was a giant; he was the first modernera Paris mayor and pushed the City of Lights into global view. As president for 12 years, he was the master strategist, much more nimble than a bulldozer, moving from the right-of-centre to the left-of-centre as the situation demanded. He was a disciple of the legendary French statesman Charles de Gaulle and yet moved left to cohabit in politics with socialist president François Mitterand, becoming prime minister twice. But among his mentors were two men who liked India very much—former president Georges Pompidou and writer-adventurer André Malraux, the first French culture minister. Chirac, who believed India could modernise itself, dealt with five Indian prime ministers—starting with one architect of economic reform P.V. Narasimha Rao and ending with another in Manmohan Singh. But he had a special rapport with I.K. Gujral and more so with Vajpayee, whose six-year tenure was during Chirac’s ascendancy in European politics. 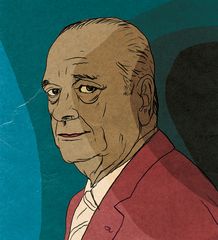 He was known both for his hard work and his magnificent parties. When then president K.R. Narayanan visited France in 2000, Chirac was keen he should visit Airbus headquarters to see the planes being made for India, and also meet with French intellectuals. There was a magnificent reception at the Élysée Palace, where Chirac invited the who’s who of Paris, to honour the “intellectual” Narayanan. In his interactions, he stressed why India was an important pole in the multipolar world as against the unipolar world of the US, propagated after the collapse of the Soviet Union. He built a good rapport with Russian, Chinese, Iranian and European leaders, apart from India. The turnout of present and former presidents and prime ministers at Chirac’s funeral showed the clout he had in a world that was fast changing. At the same time, thousands of ordinary French citizens queued up to pay tributes, mourning the man who brought in economic reforms and increased prosperity of the ordinary citizens.

For Chirac, the rise of India, economic and military, was needed to balance the Asian region. His ambassadors to India were encouraged to convey his support to the big changes that were happening. On the strategic front, he was proud that France had helped launch satellites of a fledgling Indian Space Research Organisation from Kourou in French Guiana on French launch vehicles, and ensured uranium supplies to Indian nuclear reactors till India was admitted to the nuclear club after the civil nuclear deal with the US. When the Communists gave outside support to Manmohan Singh, it was a political cohabitation that Chirac had experimented with three decades earlier in France. He was proud of his height. On both his visits, he admired the tall presidential bodyguards in the Rashtrapati Bhavan. A towering friend indeed for India!