Narendra Modi’s pre-election rally in Haryana saw both huge crowds and a large number of earthen pots. Heeding the prime minister’s call to stop the one-time use of plastic, the Haryana government had ordered the use of earthen pots to provide water to the rallyists. There was floral decoration for each row of pots to celebrate the disappearance of the ubiquitous plastic bottles.

Consumer Affairs Minister Ram Vilas Paswan has asked state governments to ensure that food and beverages are not served in plastic plates and cups in hotels and at public events. Even as regular and large-scale plastic users scramble for alternative materials which have the utility and durability of plastic, there is panic among the small and medium enterprises across the country which produce single-use plastic items. 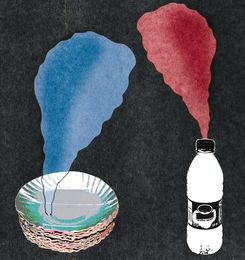 The prime minister’s office wants the anti-plastic campaign to be on the same level as the Swachh Bharat mission, for which hundreds of celebrities were roped in, and politicians from the prime minister downwards used the broom to spread the message and also get publicity. Yet, the cleanliness campaign has not really resulted in a clean country. The main reason is the lack of sustained political and administrative will among state governments, municipal corporations and village panchayats. Mega cities across India still have unswept roads and uncleared garbage. The mountains of garbage in Delhi, Mumbai, Bengaluru, Kolkata and Chennai show that the corporations, despite their huge budgets, lack work ethic.

While civic employees were to do the actual groundwork, the failure of political leadership in corporations and panchayats is evident. Though the BJP and its NDA partners rule 20 states, the BJP did not hold its chief ministers, ministers and mayors accountable for the cleanliness campaign. In Delhi, where the party controls all the four corporations—New Delhi, East Delhi, South Delhi and North Delhi—only New Delhi Municipal Council, which administers the central capital area, maintained cleanliness, thanks to low population density, and the concentration of large Indian and foreign institutions. The NDMC is also run by bureaucrats, though politicians like Arvind Kejriwal and Meenakshi Lekhi are members. The other three corporations are controlled by the BJP, with party members being mayors. But the party has not aggressively monitored the work of its mayors and councillors to ensure the full implementation of the Swachh Bharat mission.

Similarly, BJP allies like the Shiv Sena and the AIADMK, which control Mumbai and Chennai, respectively, have also not leaned heavily on their civic representatives. Though there is an All India Council of Mayors in existence since 1958, the mayoral brotherhood has not been effectively established for exchanging best practices and standardising issues of hygiene, public health, food and other essential elements which contribute to good civic life.

The concept has also not percolated to small towns and villages, which have budgetary and other challenges. The plastic elimination campaign can draw critical lessons from the successes and failures of the Swachh Bharat mission.