BJP's ploy for an upper hand in Rajya Sabha

The rush by the BJP to woo opposition members of the Rajya Sabha is driven by its desire to have a comfortable majority in the upper house of Parliament. But BJP managers are working on a deadline to persuade members of smaller parties to jump ship. The grand project to have a bigger majority in the Rajya Sabha is aimed at getting the parliamentary stamp to scrap Article 370 of the Constitution, which grants special autonomy to Jammu & Kashmir, by the winter of 2021. This article has been a pet peeve of the Bharatiya Jana Sangh and later the BJP, which has fought elections on the promise that they would not allow dual authority over the sensitive border-state. Home Minister Amit Shah is keen to achieve this objective within the first two years of Narendra Modi’s second term.

A constitutional amendment requires voting by at least two thirds of the total membership of the house, and support of at least half of the total membership. As the Rajya Sabha’s total strength is 245, the government would need a minimum of 164 members present and voting. After engineering defections of four members of the Telugu Desam Party and one of the Indian National Lok Dal, the BJP’s strength has gone up to 78. The BJP’s allies add another 31 members, led by the AIADMK with 13 members and followed by the Janata Dal (United) with six. The four nominated members have pledged support to the BJP, taking the National Democratic Alliance’s strength to 113. The prime minister can nominate two members, which would then add up to 115. Still, the numbers required are a big ask. 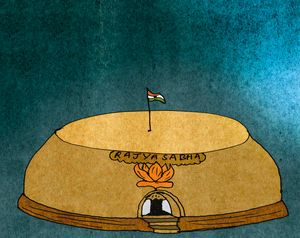 The BJP has to negotiate hard with the regional parties that are not hostile to the Modi government to gain their support. Parties like the Biju Janata Dal (seven members), Telangana Rashtra Samithi (six) and YSR Congress (two) have already demanded special status or treatment from the Centre. Then, there are six independent members who would have their own demands. Even if the BJP gets all their support, it would still come to only 136.

The electoral setback suffered by the BJP in the 2018 assembly elections in Rajasthan, Madhya Pradesh and Chhattisgarh had slowed down its growth in the Rajya Sabha. If there is a setback in Maharashtra, the second largest assembly in the country, it would further affect its chances.

That is why the BJP is looking for members in smaller opposition parties who can switch sides. The first indication has come with the resignation of Samajwadi Party member Neeraj Shekhar, reducing the party strength to 12. Shekhar is likely to be reelected for the remainder of his term as his seat is in Uttar Pradesh, where the BJP enjoys a brute majority in the state assembly.

The Congress leads the 15-party opposition with 48 members; the total opposition strength is 106. But the ruling party is sending feelers to members of parties with single-digit strength. It is a game of domination played with both aggression and patience. The party is also wooing opposition MLAs in different states to bolster its vote kitty for the Rajya Sabha elections. West Bengal leader Mukul Roy, who was a heavyweight in Trinamool Congress before defecting to the BJP, has declared that 103 MLAs from the Trinamool, the Congress and the CPI(M) are ready to cross over to the BJP. Even as Shekhar joined the BJP formally a day after resigning from the Rajya Sabha, there was a buzz in Parliament’s corridors that two Rajya Sabha members, from the Samajwadi Party and the Bahujan Samaj Party, were being “prepared” to resign from the upper house.

The big political wolf is on the prowl among the opposition’s chicken coops, with the bigger target of altering the constitutional equation in Jammu and Kashmir.