The BJP’s chowkidars on the western front have a tough task—to repeat the miracle of 2014, when the party and its oldest allies, Shiv Sena and Akali Dal, had won 85 per cent of the seats. From sunny Goa to snowbound Ladakh, the NDA had won 114 of the 132 seats; Goa, Maharashtra, Gujarat, Rajasthan, Haryana, Punjab, Jammu and Kashmir and Union Territories of Daman and Diu and Dadra and Nagar Haveli stood by the BJP, thanks to the Modi wave.

The commander in chief in the west is party president Amit Shah who has fielded himself from Gandhinagar in Gujarat. It is a front where support has been wobbly ever since the big Lok Sabha victory. The party won the assembly election in Haryana; emerged as single largest party in Maharashtra and went for a partnership with ally-turned-foe Shiv Sena; lost to the Congress in Punjab and Rajasthan; scraped through in Gujarat in a bruising fight with the Congress; and managed governments in hung assemblies of Jammu and Kashmir and Goa. It is a region where the Congress strongly hopes for a big revival to boost its numbers, along with southern and central Indian states. 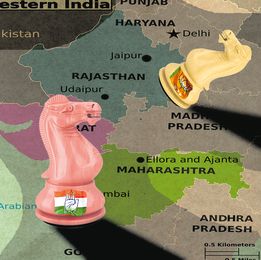 The big guns of the BJP like Chief Minister Devendra Fadnavis and Union ministers Nitin Gadkari, Prakash Javadekar and Piyush Goyal in Maharashtra; Chief Minister Vijay Rupani and Deputy Chief Minister Nitin Patel in Gujarat; former chief minister Vasundara Raje in Rajasthan; and Chief Minister Manohar Lal Khattar in Haryana have been given strong targets. After the December 11 defeat in three states including Rajasthan, Shah reached out to estranged ally Shiv Sena to bring back the political balance in Maharashtra, where a resurgent Congress-NCP was active. Like in Maharashtra, the Gujarat leaders were told to aggressively woo opposition MLAs to organisationally weaken the Congress and to demoralise its cadres.

The surprisingly staggered election schedule in Maharashtra and Gujarat was also an opportunity. Polls in Haryana are scheduled for the penultimate phase and those in Punjab for the last phase. This schedule gives plenty of time for BJP campaigners. But the Congress, too, is happy as it also gets more time for its principal campaigner Rahul Gandhi to crisscross these crucial states, where the advantage is that the party has strong campaigners in Chief Minister Ashok Gehlot and Deputy Chief Minister Sachin Pilot in Rajasthan, and in veteran Chief Minister Amrinder Singh of Punjab.

The western chessboard is also interesting as the states were not evenly represented in the Narendra Modi government. While the biggest state, Maharashtra, had large number of cabinet ministers in crucial portfolios, tiny Goa had, for some time, its leader Manohar Parrikar as defence minister, before he went back to become chief minister. Gujarat’s cabinet ministers were Rajya Sabha winners from outside, like Arun Jaitley and Smriti Irani. But the state’s biggest asset was the prime minister himself. Haryana and Punjab had a cabinet minister each, but the larger Rajasthan did not have a cabinet minister, though during the last two years, Rajyavardhan Singh Rathore got important independent charges as minister of state. From the Western Ghats to the Himalayas and through the deserts, the western front is a formidable challenge for the two national parties.