As Vladimir Putin begins his fourth term as Russian president, the Narendra Modi government is trying to do a balancing act between Russia and the United States on arms purchase issues. US President Donald Trump, along with his western European allies, has imposed major sanctions against Russia, and several Russian arms companies have been put on the American watchlist.

The American diplomats who are monitoring the implementation of the sanctions have been urging India to minimise its contracts with Russian companies, warning that the agreements to purchase American military hardware and high-technology equipment would become difficult otherwise. New Delhi, however, has taken the stand that it is buying military equipment and sensitive goods for self defence and not for offense against other countries. The Modi government has also argued that contracts with Russia have been on for more than five decades, and India cannot arbitrarily pull out of them. Since the sanctions are not imposed by the United Nations, India is arguing that a comprehensive international discussion is needed on the issues that have caused the deep rift between the Russians and Americans. 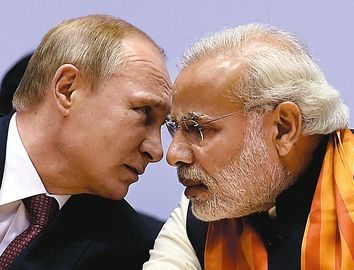 India had endured international sanctions since 1974, when it first tested a nuclear device in the Pokhran desert, and again since 1999, when a series of tests were done at the same place. Indian scientists, led by Raja Ramanna and A.P.J. Abdul Kalam, dealt with the sanctions by developing indigenous capacities and sourcing stuff from friendly countries like France, South Africa and Russia.

New Delhi wants to keep the relations with Moscow smooth, as there are regional shifts and balances with the improved relations between Russia and Pakistan. Also, there is still a lot of gratitude towards Russia (and the erstwhile Soviet Union) for the way it stood by India in difficult times.

Russia was annoyed by the increasing closeness between India and the US since the time of the Manmohan Singh government. But, Moscow has now agreed that India needs to maintain a balance, and there is a sense of realism in the bilateral relations that both countries should keep their relationship on an even keel in what is becoming a multipolar world. The Modi-Putin summit this winter will need a lot of work from both countries.