This shloka in the Bhagawad Gita existed way before the BJP adopted lotus as its symbol. And, lotus was adopted as India’s national flower when India attained the status of a republic with its own identity markers. After the 200-year-long foreign rule over our country, which was catastrophic for our culture, our leaders at the time wanted national identity markers that represented our culture.

Lotus was adopted as India’s national flower for three reasons:

1) National emblem of India stands on a full-bloomed inverted lotus.

2) Lotus epitomises beauty and signifies non-attachment, despite growing in dirt.

3 It smells of myrrh, which is taken as a message to humankind. 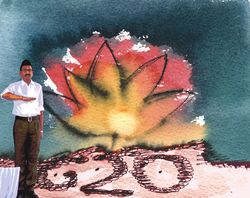 A human is adjourned to be like a lotus—they should work without attachment, dedicate their actions to God, and remain untouched by sin like water on a lotus leaf. The BJP adopted lotus as its symbol because of its relevance in our culture.

In 2023, India will preside over the prestigious G20 for the first time. The G20 countries account for 80 per cent of the world’s GDP. It is a chance to present India as a global leader and raise issues that impact not just a few countries but the entire humanity. The 2023 G20 summit’s logo carries the earth on a lotus, signifying that the group of 20 countries must work selflessly towards goodness of humanity without being attached to any personal gain.

Congress’s Jairam Ramesh said, “The BJP’s election symbol has become official logo for India’s presidency of G20!” Ramesh, probably, was lost in party-wars. He forgot that it was the Congress in 1950 that adopted lotus as our national flower. He also forgot that an India exists that is beyond political wars, and we need to take pride in our culture and show solidarity in front of the rest of world as citizens of this great country.

The Congress leaders may have forgotten that one of the most prominent leaders of Congress [Indira Gandhi] used the lotus as a symbol for the non-aligned movement in 1983. So, criticising it now makes absolutely no sense. Ramesh is so blinded that he fails to recognise that the G20 logo draws inspiration from the vibrant colours of India’s national flag—saffron, white, green and blue. It juxtaposes earth with the lotus. The earth reflects India’s pro-planet approach to life—one in perfect harmony with nature. Below the G20 logo is “Bharat”, written in the Devanagari script. Why is Ramesh or other Congress leaders not able to see the other markers in the logo? ‘Bharat Jodo’ seems big talk from people who cannot appreciate a logo carrying the national flower. The true unification of India is being carried out by Narendra Modi by putting India in a leadership position on the global podium.

However, just as the leaves of lotus, despite being born out of mud and water, do not let a water droplet set on it, Modi will shrug off this uncalled-for negativity and continue doing what he does best—service to the nation.