Murmu comes from the interiors of the country, is dynamic, and has worked at the lowest level of government machinery. Not just that, she has worked as a teacher and is quite spiritual. Her career started only 25 years ago but her sincerity has got her where she is today. 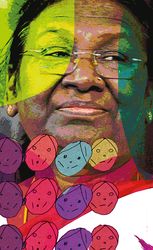 Murmu’s victory is a victory of the poor tribal woman of the country for whom completing education was a dream. In fact, it gives hope to everyone who dares to dream. The victory is also for those who believe in the power of hard work, and are not afraid of chasing any position, while working tirelessly and sincerely towards the welfare of the poor, development of backward castes and growth of the nation. To become the first citizen of India is indeed a great accomplishment. And, anyone who reaches a certain position is guaranteed of many supporters. Murmu’s candidature was supported by Prime Minister Narendra Modi and it is proof that the NDA government believes in equality—giving equal opportunity to all groups of society. Murmu spent all her life, silently, working for the welfare of her community and the public and it has paid off.

Until 2014, there was a budget provision of Rs21,000 crore for tribal welfare schemes, but after the Modi government came to power, it has increased to Rs78,000 crore. Fifty Eklavya residential model schools are being built in tribal areas. Free rations are being given in every village. Earlier, when only around 10 crops were recognised [as forest produce], today 90 have been recognised and government assistance is being given. Approval has been given to set up about 150 medical colleges in tribal areas. About 2,500 Van Dhan Vikas Kendras and 37,000 self-help groups have been formed till date.

The NDA government’s contributions towards tribals are different from past governments, because, in the past, many tribal groups were forced to assimilate into the dominant culture of the country—their aboriginal nature was looked down upon. Some groups, such as the Bhils, Gonds, Santhals, Oraons, Mundas, Khonds, Mizos, Nagas, and Khasis, resisted change and assimilation to maintain their cultural identities and languages. Such an isolation was seen as a problem to national integration, but Murmu’s victory says out loud that one does not have to change traditions and cultures to be in the mainstream. And Murmu is as mainstream as it gets.