Delhi has a rich pre-Mughal history, which has been shrouded in secrecy

Azadi Ka Amrit Mahotsav is not only about celebrating our culture and the sentiment of patriotic pride, but also about digging out the past and giving credit where due. When India is heralding her 75th year of independence, we need to remember great people who have contributed in so many ways by sacrificing their lives for the motherland. We need to respect them and get inspired by their struggles, heroism and martyrdom.

As a Delhiite, I have grown up seeing the structural remains of an unknown history that we never studied in history books. Same is the case with Vadnagar, in Gujarat, which has been a living city for the last 2,500 years. Some parts of our culture were never told to us due to reasons that are unknown. 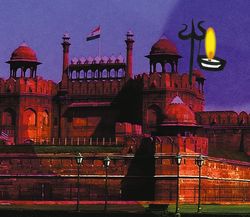 The Union ministry of culture, under AKAM, is re-discovering the past of Delhi buried under the remains of Mehrauli and other parts of Delhi. It is a fact that Delhi had a rich pre-Mughal history, which has been shrouded in secrecy.

The foundation of Indraprastha—Delhi was known as Indraprastha during the times of the Mahabharat period—is well known. Successive waves of incursions from the west, and internecine warfare, caused the gravity of power and the urban conglomerate of Delhi to shift towards resettlement on several occasions.

After the downfall of the Gupta empire, Yoginipura came into existence in the 10th century CE, followed by the Tomara dynasty, when in 1052 to 1060 CE Maharaja Anangpal II laid the foundation of the city of Dhillika or Dhilli, which finds mention in Bijolia and Sarban inscriptions. Anangpal Tomar had built Lal Kot, the supposedly original ‘red fort’ in the present day Mehrauli region. Anangpal Tomar II had built the Anang-Tal in south Delhi, which is now being revived by ministry of culture into an Amrit Sarovar.

Similarly, long before excavations started in the small city of Vadnagar, there were literary references to its ancient past. Various historical references attributed Vadnagar as Anartapura, Anandapur, Chamatkarpur, Skandpur and Nagaraka. The region finds its earliest mention in the second century CE inscription of Mahakshtrapa Rudradaman. Vadnagar was also one of major Buddhist centres in the country, similar to Kushinagar, Sarnath and Bodhgaya; Buddhist relics were found in the area that depict scenes from the Jataka tales, which are episodes from the Buddha’s life.

Let us eagerly wait for the Amrit Sarovar at Anangtal, Mehrauli and Vadnagar to come to life, and become popular spots for the world to see; there is much more to our culture and history than just Taj Mahal.