More than 33 crore Covid-19 vaccine doses have been administered in India till date. The world’s largest vaccination drive, which started this January, is running successfully.

Constant statements from opposition leaders, questioning the availability of vaccines, are pitiful actions to belittle the Centre’s efforts.

The Congress and its paid media played a significant role in creating vaccine hesitancy in Indians. A couple of cases of serious side-effects were blown out of proportion to instil fear in citizens. Much wastage was reported in the early days of the vaccination drive due to vaccine hesitancy. And, when the deadly second wave hit us in April, people, who were not vaccinated and had got infected, found themselves between the devil and the deep sea. It took almost two lakh deaths, and the Union health minister’s request for support from opposition in testing times, for the Congress as well those hesitant to take vaccines to realise that vaccination is mandatory to fight off the virus.

If you look closely, only three countries are majorly responsible to manufacture vaccines for the whole world—the US, India and China. According to data analytics company, Airfinity, 3.13 billion doses can be produced in a year in India, second only to the US that can produce 4.69 billion by end of 2021. Third is China with a capacity to produce only 1.90 billion doses a year. The high cost of production in the US makes Indian-made vaccines everyone’s first choice. Even Russia struggled to keep up with the demand of its home-grown Sputnik V. 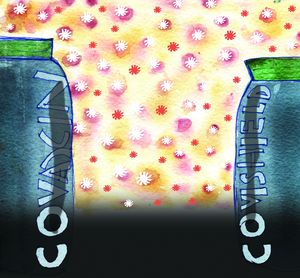 It was easy for Chief Minister Arvind Kejriwal to ask to ‘share the formula’ of the vaccine with other manufacturers. But it is imperative to understand that manufacturing vaccines means dealing with a live virus, and the manufacturing unit needs to meet certain safety standards before getting a licence. It is not your regular chemical salt-based pill whose licences could be distributed to any manufacturer.

Despite the roadblocks, the Centre took matters in its own hands and a record 81 lakh vaccines were administered on June 20.

Those questioning India’s vaccine strategy should know that the whole world’s strategy was same—first comes the health workers, then the elderly and then comes the least-affected adults below the age of 45. Data shows that the virus is partial to the elderly. Of the Covid-related deaths, 88 per cent were in the age group of above 45 years. Even though infection increased in people below 45 years of age in the second wave, more than 60 per cent of severe cases were seen in aged men and women. This makes the vaccination strategy perfect for India, and any government would have taken the same route to save its citizens.

Now that Delhi and Mumbai, two of the worst-hit cities, registered less than 500 cases as on June 27, and we see a silver lining to the dark clouds, one should not forget that India has controlled the worst possible calamity in recent times within three weeks, jabbed more than 33 crore people till date despite hesitancy created by opposition, provided food subsidy of Rs26,000 crore under Pradhan Mantri Garib Kalyan Anna Yojana, and had solved the oxygen crisis in a matter of few days.

With more than five to seven million doses being administered every day, it is safe to say that the Centre’s vaccination policy is a success.