Beginning of a harmonious phase

The construction of Ram Mandir in Ayodhya is neither anti-secular nor anti-dalit. In fact, August 5, 2020, will be marked with a golden stamp in Indian history as Prime Minister Narendra Modi laid the foundation stone for Ram Mandir at the birth place of Lord Ram. The bhoomipoojan by Modi was the end of a civilisational exile, and the beginning of a new India, with its ethos entrenched in an ancient value system.

Our model of governance is rooted in the
principles of Ram Rajya. August 5 was a historic day that lifted the spirits of the country from a pandemic-induced negativity.

The construction of Ram Mandir cannot be branded as anti-secular because our Constitution does not discourage celebration of a religious activity. Rather, it strives to protect the religious sentiments of every individual. The Constitution does not promote agnosticism or atheism. It promises every individual the right to practise and preach his or her own religion within legal limits.

We must note that the religious aspect of the Ayodhya dispute was not taken into consideration by the Supreme Court; instead, it treated the matter as a mere land dispute. Incidentally, the birth places of all religious figures in the world are well-protected—be it Bethlehem, Mecca in Saudi Arabia or Lumbini in Nepal. What could be a greater proof of India’s secularism than the fact that the birth place of the most revered Hindu god was treated as a mere land dispute? I cannot understand how celebrations of building a temple can be considered anti-secular or against the constitutional idea of a secular India. 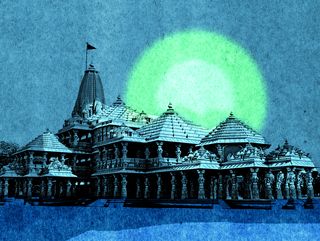 A staunch Hindu, I believe that construction of a mosque at the land allotted to the Sunni Waqf Board will not insult any Hindu in any manner. In another narrative, in a bid to undermine Hindu consolidation, some people have raised the issue of discrimination by upper caste Hindus against lower caste Hindus. They ignore the fact that the Ram Janmabhoomi Teerth Kshetra has a dalit, Kameshwar Chaupal, among its 15 members. He has been entrusted with the responsibility of supervising the construction of the temple. He is the same person who performed shilanyas for Ram Mandir in November 1989. And a dalit family was given the first prasad of the bhoomipoojan ceremony. It was sent to Mahaveer, a dalit, by Chief Minister Yogi Adityanath.

I suggest that the so-called liberals put the bitter political mobilisations over religious issues behind, and look forward to inclusive governance. The construction of the temple is the logical result of the Supreme Court judgment; it should mark the end of an older, hostile phase of India and the beginning of a fresh, harmonious phase.

India has a large population of Hindus who were historically wronged by invasions and destruction of their places of worship. So, there was a wave of happiness throughout the country on the auspicious groundbreaking ceremony.

Lord Ram is the most venerable religious figure for Hindus, and his birth place has the greatest significance in our culture, texts and sentiments. There is no aspect of an Indian’s life where Ram does not inspire. His ideals of an inclusive, just and harmonious state are still instilled in every Indian and continue to influence us. It is unwise to malign the image of maryada purushottam Shri Ram with taunting words like anti-secular, unconstitutional and discrimination. We eagerly wait for the completion of the temple that will lead to a just and ideal Ram Rajya in our country.