The decision is in line with the Transgender Persons (Protection of Rights) Act, notified by the Central government in December 2019, under which no establishment can discriminate against transgender persons in matters relating to employment, recruitment and promotion.

The transgender community has for long been the most neglected part of society. So much so that they are denied the basic human right to exist within the respectable confines of society, thereby pushing them to maintain their own secretive subculture in an almost parasitic way. They often support themselves by begging, through sex trade and petty businesses. The only times they are allowed into the ‘respectable settings’ are during child birth and wedding functions, where they earn their livelihood, and two minutes of limelight and respect.

Not all transgender persons are identified at birth; some realise their identity as they grow up and find themselves caught in a wrong body. They often face harassment for their choices of attire, demeanour and behaviour. With minimal support from families—who tend to disown them because of societal pressure—no medical facilities for sex-change surgeries and lack of means to earn a respectable income, they are forced to live under shackles of poverty, relying on pre-defined roles to earn a livelihood. 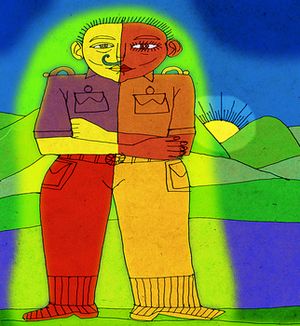 According to a study published in The Diplomat, 51 per cent of transgender persons in India have faced some sort of physical abuse at the hands of either their own families or in the form of mob-lynching. The widely believed stories about their magical abilities to curse or bless, their make-up smeared faces and gaudy clothing mask the stories of sex trade, exploitation, cruel and dangerous castrations, and constant humiliation. They lead a life of broken reality where they crave for respect and inclusion in society. Eleanor Roosevelt and her team drafted the most visionary document ever that was adopted at the UN General Assembly in Paris in 1948—the Universal Declaration of Human Rights (UNHR). It sensitised the world about conscience, kindness, and equality for all.

Japan was the first country to recognise the third gender, when it passed an act in 2003. Even though it was a controversial law, as it mentioned gender identity could be a disorder, it still put the issues of transgender persons in the forefront. Later, the UK, Spain, Uruguay, Argentina and other countries followed suit and introduced their own versions of recognition of the third gender by law.

In India, the Supreme Court gave a historic judgment in National Legal Services Authority vs Union of India case, declaring transgender persons to be the third gender that had the right to self identification, making them eligible for reservation in jobs and educational institutions, which later transcended to the passing of the Transgender Persons (Protection of Rights) Act in August 2019.

It is pertinent to mention that transgender persons enjoyed a special status in ancient Hindu society. Lord Ram brought transgender persons from the forest into the city symbolising their respectful inclusion. Lord Krishna let Shikhandi, a male born in a female’s body, take part in the Kurukshetra war. With the decision to let transgender persons take up leadership roles in paramilitary forces, the government is returning to the community its right to command respect, transforming its broken dreams into reality.