The economic stimulus package of Rs20 lakh crore, announced by the Narendra Modi government is one tight slap on the faces of all his critics. The package was followed up by a series of announcements intimating how and where the funds will be utilised for the four Ls—land, labour, law and liquidity. It is a comprehensive package that has touched upon major sectors of the Indian economy, along with encouragement to supporting sectors. It is a clearly defined leap towards economic reforms that will help India become self-reliant and resilient.

The Covid-19 virus has changed the face of the world economy. Import and export sectors have experienced a cascade effect. Self-reliance or ‘Atmanirbharta’ is the only way to be now. The prime minister is hell-bent on realising a dream that any economy strives to achieve, a sense of self-sufficiency and least dependency on imports.

When the first case of Covid-19 hit the country, not even a single PPE kit was being manufactured in the country. But, within a span of less than two months, an average of 1.5 lakh PPE kits was manufactured locally. This impossible task was being realised by the hard work of the Central health ministry, with support from local industry. The critics, backed by the opposition, are trying hard to paint a dreaded picture, concentrating on a few negative cases.

Due to the monetary help provided by the government, crores of poor, directly or indirectly, are being free-fed on a daily basis since the beginning of the lockdown. Financial assistance of Rs34,800 crore, using digital payment infrastructure, was provided to some 39 crore beneficiaries. The 20 lakh crore package includes Rs1.7 lakh crore for providing free foodgrains to the poor and cash to poor women and the elderly. 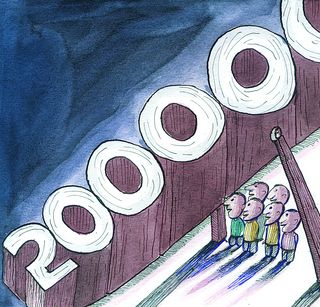 The medium, small and micro enterprises are the backbone of Indian economy as they not only constitute 24 per cent of the GDP from service activities, but also provide employment to approximately 120 million people. They promote inclusive growth by providing employment opportunities in rural areas, especially to the weaker sections of society. The finance minister has announced Rs3 lakh crore emergency working capital facilities for businesses, including 45 lakh MSMEs.

In another step towards Atmanirbhar Bharat Abhiyan, no global tenders will be allowed in the government sector for up to Rs200 crore. The Centre also announced a scheme to provide homes to migrant labourers and urban poor at affordable rent. It has extended the interest subsidy scheme for middle-income families till March 2021 to boost housing demand. The Credit Linked Subsidy Scheme was also extended up to March 2021 and it will benefit approximately two lakh middle-income families. There was also the announcement of the one-nation-one-ration-card scheme to allow migrant workers to access public distribution system benefits from any fair price shop across the country. The schemes have proved that the government has its heart in the right place, caring for all with utmost sensibility and sensitivity.

Apart from these, there is a series of other schemes and benefits that have been announced by the government, like a booster for animal husbandry and fisheries department for the holistic growth of the nation. The sad state of affairs is that the opposition chooses to stick to little loopholes it can find in the larger good of the country and spread make-believe stories against the Modi government in a constantly failing attempt to revive its sunken ship. It is high time the opposition realises that working with the Modi government to rebuild the nation in these testing times will be a smarter idea than to mindlessly criticise the policies and make oneself a laughing stock.