Getting closer to the US

The recently concluded visit of US President Donald Trump to India has reinforced the bet on a longer-term convergence with the US, elevating the relationship to a comprehensive global strategic partnership.

Trump’s visit has brought about a major defence partner agreement and Indo-Pacific alliance agreement. The US has supplied India with the latest lethal weapons and advanced technologies. It has extended financial assistance, trade concessions and market access on priority. It has extended political and diplomatic support at international platforms like the United Nations, World Trade Organization, the United Nations Security Council, the International Monetary Fund, the Financial Action Task Force, the European Union, the World Bank and the Nuclear Suppliers Group. 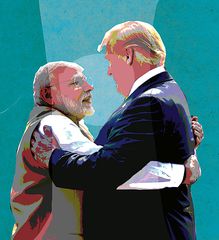 India has signed the deal to buy US military equipment worth three billion dollars. This will largely contain attacking helicopters. Another deal with ExxonMobil will see India import more liquified natural gas (LNG) from the US. This will majorly increase clean fuel usage in the country, along with reducing dependency on the Middle East for our fuel requirements. With this deal, India targets to achieve 15 per cent share of gas in the energy basket in 10 years, compared with the present 6.2 per cent.

During Trump’s visit, the significance of 5G wireless network and its requirement to be a way for freedom and progress was discussed. The US Federal Communications Commission Chairperson Ajit Pai, Telecom Regulatory Authority of India Chairman R.S. Sharma and Telecom Secretary Anshu Prakash conducted meetings to propel the matter. 5G is the next generation of wireless technology, and if this materialises between the two countries, it will boost data speeds and propel the Internet of Things, with the potential to bring radical changes in agriculture, manufacturing, health care and education.

The history of the Indo-US relationship has been a bumpy ride. After India’s independence from the colonial rule, India launched the Non-Aligned Movement. Even though the Congress government at the Centre maintained a non-aligned stand, the tilt was more towards the erstwhile USSR. On the other hand, the US-Pakistan alliance was a major peeve. A dramatic turn occurred in the 1990s—the Cold War ended with the disintegration of the Soviet Union, and US-Pakistan relations plummeted, because of the latter’s clandestine nuclear programme.

The final blow to the US-Pakistan relations came with the 9/11 attack in the US, and it gave way to positive ties between India and the US. India and the US inked the civil nuclear cooperation agreement, an initiative that changed a three-decade US moratorium on nuclear energy trade with India.

With Narendra Modi coming to power, the Indo-US relations are at an all-time high. Former US president Barack Obama invited Modi to the White House, and Obama accepted India’s invitation as chief guest for the 68th Republic Day celebration in 2015. A few months later, India and the US signed the documents to renew the ten-year Defence Framework Agreement. In 2018, India and the US inked the Communications Compatibility and Security Agreement (COMCASA), which gave India access to advanced communication technology used in US defence equipment, and allowed real-time information sharing between the armies of the two countries. The deal was under talks for over a decade, and it finally came into being.

Modi and Trump enjoy massive popularity in their respective countries and have been able to share the same in respective foreign lands as well. The Howdy, Modi! event was a huge success in the US and Namaste Trump saw around a million people cheering for the global leader at Motera Stadium. Though the trade deficit agreement is under discussion, it is safe to say that we have finally found a close ally in the US.